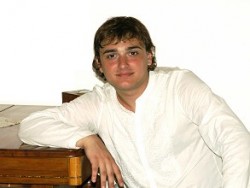 Alessandro Mazzamuto is ICMA’s Young Artist of the Year 2013  in the instrumental category. He was born in Catania in 1988 and graduated from the Music Institute Vincenzo Bellini in Catania, under the guidance of  Epifanio Comis, with honors and honorable mention. Finalist at the 58th edition of the prestigious Busoni Competition in Bolzano (2011), he was awarded the special prize Gianandrea Lodovici which consists in the production of a CD for the German label Arts. This prize was awarded at the discretion of the president of the jury, Martha Argerich, who invited him for this year’s Progetto in Lugano. Alessandro Mazzamuto is currently student of Epifanio Comis at Accademia Pianistica Siciliana in Catania. ICMA’s Stephen Hastings, editor of the Italian magazine Musica made this interview with the young pianist.

Am I right in thinking you were not exceptionally young when you started formal piano lessons?
I was nine and a half when I started. But I had already begun studying the violin a couple of years earlier. I had felt drawn to the piano however since the age of four, when I discovered the instrument in my grandmother’s house and started picking out melodies by ear. But my parents pointed out that you have to be outstandingly good to succeed professionally as a solo pianist whereas with a string instrument you also have the chance of a career in an orchestra. They are both of them cellists and my mother played in the Orchestra of Catania’s Teatro Massimo Bellini.

Although you started relatively late, you made your concert debut very early…
After just three months of formal lessons I was the soloist in Mozart’s A Major Piano Concerto K 414 in a concert in Catania. A wonderful experience.

Obviously your familiarity with the keyboard was to a certain extent inborn. How do you explain this?
I am flabbergasted myself by the ease and spontaneity of my playing when I listen to recordings made at that time. I don’t know how to explain it: one even hears a degree of musical sensibility that one associates normally with more mature players. All I can say is that I simply wanted to be myself and think only of the music. And I must add that my teacher Epifanio Comis immediately recognized the unusual facility of my playing and gave me lessons seven days a week. I learnt more by listening to his playing than by listening to his words. I owe my entire musical development to him.

Did you tend to learn the music initially more by ear than by sight-reading?
In my case they were equally important. It is vital to listen to others – without, however, imitating them. For imitations always sound artificial and don’t allow you to express what you really feel. And it is very important to refer continually to the score, where the composer’s wishes are expressed.

As you grew older, did you find it difficult to maintain the same degree of spontaneity?
I began to have a different sort of awareness of what I was doing when I studied Brahms’ Concerto n. 1. I was fourteen at the time and Brahms is such a deep composer that I had to reflect a lot on what I was playing and try to express my full potential as an interpreter. The music requires real maturity and for the first time I felt an enormous responsibility for what I was playing.

What would you say is the secret of maestro Comis’ teaching?
Enormous devotion and love for a job which inevitably involves a certain degree of emotional tension, because emotion lies at the basis of all music-making. If we fail to feel the emotions while we are playing the music in a certain sense ceases to exist. Maestro Comis has been like a second father for me. He transmits energy and enthusiasm, as well as great expertise, through his teaching. 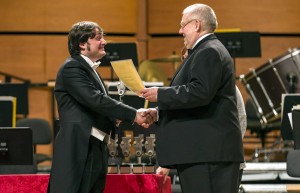 Why did you choose Rachmaninov for your first solo recital recording?
In truth the decision was not entirely my own. I had originally thought of recording pieces by Chopin and Mozart, or the Bach-Busoni Chaconne. The final choice was the result of a discussion with the record company and Roberto Prosseda, who was artistic director of the Arts recording. And I am very grateful to him for his supervision: both he and maestro Comis were present during sessions and gave me useful advice.

During the ICMA concert in Milan you play a movement from Rachmaninov’s Concerto n. 2. When did you first study this score?
I think it was when I was fourteen: the same period in which I studied the Brahms Concerto.

What sort of challenge does the Rachmaninov Concerto represent for a pianist?
I try to avoid using the word challenge because music should shouldn’t become the expression of a challenge but of the love for what one plays. That is the message the audience should receive. The important thing is not to play so many notes at a certain speed but to move people with one’s playing. We performers live thanks to the public, and if there was more great music in the world, the world would be a better place.

Is it easy to enter the emotional climate created by Rachmaninov?
This composer suffered a great deal and in his music you can hear these feeling of anguish―even of depression when he was composing the C minor Concerto. In spite of what people say, he is not  a more superficial a composer than Brahms. It is up to the pianist to reveal the different sort of profundity that he expresses. 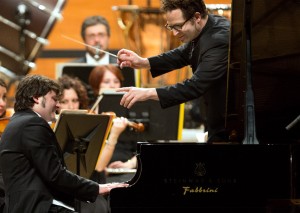 What’s your impression of Rachmaninov’s own recordings?
He was a formidable pianist. In the Second Piano Concerto the music acquires in his recording an irresistible momentum. It is like being caught up in a vortex.

Is beauty of tone a priority for you?
For me the sound I make is an expression of technique, but I find it difficult to separate one aspect of my phrasing from another. In terms of priorities, what I can say is that what is important for me when I go to a concert is not the correctness of all the notes but the emotional impact of the performance. This is the spirit in which one should experience live music.

Do you have any ideas of how to attract more people of your own age to classical concerts?
If the performer retains his humility and never assumes that he has definitively «arrived» it is easier for him to communicate with a young audience. But children need to be exposed to classical music from their earliest years at the school. They are our future audiences. If we don’t cultivate their musical understanding now, we may end up playing to empty halls.

What repertoire are you working on at the moment?
Apart from Rachmaninov, widely requested since I made the recording, I try to present as broad-ranging a repertoire as possible.  I like chamber music a lot too. I often play in duo with my brother Lorenzo, who is now in his final year studying violin at the Moscow Conservatory. We play pieces like the A major Sonata by César Franck.