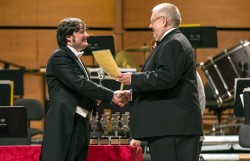 Sicilian pianist Alessandro Mazzamuto, Young Artist of the Year 2013 of the International Classical Music Awards (ICMA), is firmly establishing his career from Dallas, United States, where he lives. He is now represented by the agency Amusart in Rome.

Mazzamuto currently serves as a teaching assistant at Southern Methodist University Meadows School of the Arts in Dallas, Texas. In the fall of 2016, he became Artist in Residence at Collora Piano in Dallas where he teaches piano, gives masterclasses, and serves as concert coordinator for international guest artists.