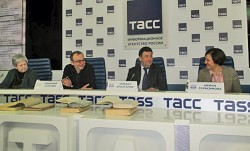 At a press conference in Moscow, Irina Gerasimova, General Manager and Artistic Director of the Russian State TV and Radio Music Centre, Orpheus, presented the multimedia project Revival Of The Musical Heritage Of Russia operated in collaboration with the company E.ON Russia. The first two realizations are the restoration of the only lithographic copy of Nikolay Rimsky-Korsakov’s Textbook on Harmony and the recording on CD of Anton Arensky’s rare opera Raphael.

The Russian State TV and Radio Music Centre is an umbrella organization for Orpheus Radio station – the only classical music radio station in Russia – and a Concert Management Centre, which includes the Symphony Orchestra of Radio Orpheus, some other orchestral ensembles and choirs. Orpheus is a member of the ICMA Jury. 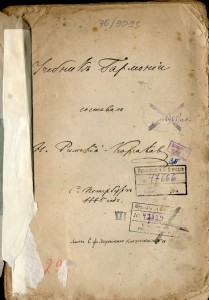 Basically, this ambitious heritage project is possible since the unique music library of former All-Soviet TV and Radio is now owned by the Russian State TV and Radio Music Centre. It includes more than a million scores and books, including very rare editions with autographs of great musicians from Taneyev to Shostakovich and hundreds of manuscripts written by Soviet composers especially for radio recording and performances. Unfortunately, some of this unique material is now in a poor condition and needs restoration and digitalization. But the aim of the project comprises also the revival of forgotten works in concert halls and operas together with the recording of the music. 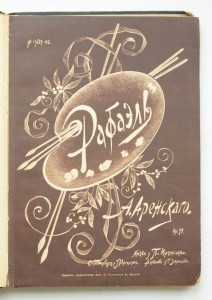 The score of Arensky’s Raphael

This was done now for Anton Arensky’s chamber opera in one act, Raphael, written in 1894 for the All-Russian Congress of Painters which took place at the Tretyakov Gallery in Moscow. The libretto is based on the life of the Renaissance artist Raphael. The opera premiered at the Moscow Conservatory on 6 May, with set-design by Leonid Pasternak. Yevgeniya Mravina took the role of Fornarina, Raphael’s model and mistress. Raphael was not well-received and subsequently forgotten for almost 120 years.

On February 20, 2015, the first concert performance of this masterpiece took place in Alexandrovsky Concert Hall in Moscow by Radio Orpheus Symphony Orchestra, the choir Masters of Choral Singing and famous Russian singers as soloists under conducting of Sergey Kondrashev. Before, this opera was recorded by the same cast and released on CD.

The next step of the project will be the performance and recording of forgotten musical works by Nikolay Golovanov. The world knows him mostly as a famous conductor of the Stalin era. For decades he was the Artistic Director of Moscow’s Bolshoi Theatre. But he was also a prominent composer. His heritage is rich and diverse, including operas, symphonic music as well as sacred choruses mostly written secretly, without any hope for a performance in Soviet times. 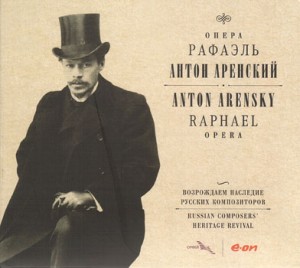