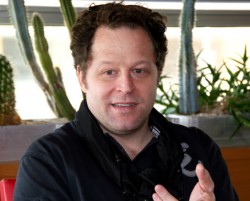 John Axelrod, who conducted the ICMA Gala Concerts 2012 and 2013 is to spearhead a multi-year exploration of the relationship between Brahms and the woman he loved, Clara Schumann, as depicted in their music. « If you listen to the Brahms symphonies, » says Axelrod, “each of them seems to inhabit a completely different, though connected, character. Then, if you listen to the songs of Clara Schumann, they also fall clearly into a very similar four moods. I believe that Clara’s own personality is in those songs, and so if that is true, it is also possible to think of the four Brahms symphonies as portraits of Clara – four different aspects of her. »

To explore this idea, four CDs will – for the first time – each pair a Brahms symphony with its ‘matching’ set of five of Clara’s Lieder. And to illustrate it further, there will be four different world-class singers as Clara, each a different voice-type (including one man!) – a fitting project to start in 2013, the 180th anniversary year of Brahms’s birth. Says Axelrod, « Brahms loved, and he was beloved – and they shared what Clara once called in her diary, ‘the most beautiful mutual understanding of two souls’. That is there in his symphonies, it finds its image in her songs. »

In the symphonies, Axelrod will conduct ‘Orchestra Sinfonica di Milano Giuseppe Verdi’ (who, says Axelrod “truly plays Brahms con amore”) and in the songs he will accompany from the piano. For the first release, in September 2013, the second and fourth symphonies will be coupled with songs sung by, respectively, Ana Maria Martinez and Indra Thomas. The second set of two symphonies and Lieder will be issued in 2014.

« This is a major release for Telarc, and perhaps one of the most fascinating we’ve ever done, » says Telarc’s Vice President of Marketing Jason Linder, “John Axelrod has not only emerged as one of the finest conductors of today, he is also one of the music world’s great innovators and both sides of him come together in this concept. »