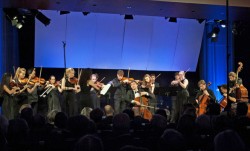 The Next Generation Festival organized at the Grand Resort in Bad Ragaz, Switzerland, is ending tonight with performances by the vocal sextet Sjaella and the Ensemble Esperanza, a chamber orchestra created in 2015 by the International Music Academy in Liechtenstein. The sixth edition of Next Generation registered a significantly growing number of visitors. For the 14 concerts, Intendant Drazen Domjanic announced a total increase of 25%. The ICMA Jury held its General Assembly during the festival.