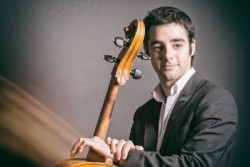 ICMA Young Artist of the Year Pablo Ferrandez was interviewed by ICMA Jury members Luis Sunen (Scherzo) and Guy Engels (Radio 100,7). They talked about his studies, his career, his repertoire and his cello.

Pablo, tell us about your first steps with the cello.
I started when I was 3. Because, well, my whole family are musicians. My father is a cellist. My mother invented a method called ‘El mago Diapason’ to teach children music…, it was the perfect environment.

You belong to a very musical family. Is it good or risky to have for instance a father who is cellist?
I think it’s great. Even my younger sister Sara, is a fantastic Viola player. It helps you a lot, because they support you hundred percent. They know how hard it is to play an instrument and be a musician and you can come to them at any time for advice. They really helped me a lot. Even today I can count on them all the time.

What does the relationship between a father and a child look like, when both are cellists?
It’s really good. I ask him very often for advice. The thing is, we also have very different opinions, so we have this insight joke that if he sometimes doesn’t like it, then I shouldn’t change it. But jokes aside, it is often very helpful.

Tell us about your years of learning…
I studied at the Escuela Superior de Música Reina Sofía for seven years, starting when I was 13. It was one of the best periods of my student life. I learnt so much there, and the school was incredible. It’s amazing that we have such a school in Spain. My teacher Natalia Shakhovskaya is a very though Russian teacher. But I learnt so much from her and she gave me many ‘tools’. I mean, I wouldn’t be here now, if it wasn’t for her.
After that I went to study with Frans Helmerson at the Kronberg  Academy in Germany. I really admire him very much, he has really helped me a lot and gave me wings.

Is Helmerson your most important teacher?
I think, both Shakhovskaya and Helmerson are of equal importance. Both belong to a completely different kind of teachers. And in my case they both complement each other in the different times of my musical education.

Did you have times when you felt like a child prodigy?
No, not at all. I don’t think that thought crossed my mind even once in my life, because I worked so hard all the time. I always worked and had a lot of discipline.

What was the importance of discipline?
It’s huge. Not only for music,  but for all aspects of life. When you learn it very early, it becomes normal, so then you don’t have to force it.

Do you have some favorite cellists?
I have many cellists I do love, like Rostropovich, Casals, Fournier…

And among the younger ones?
I like very much Nicolas Altstaedt, he’s exceptional. I admire also very much my best friend Kian Soltani, he is fantastic cellist. I know so many great young cellists. We live at a golden age for the cello. But I must say that with the cello being so present in my ears, I often switch to piano music, especially to music played by Martha Argerich. She is my favorite pianist. And I listen a lot of vocal music. I like Cecilia Bartoli a lot.

Which conductors did you work with?
I worked with many, Gergiev, Mehta, Juanjo Mena, Temirkanov…  I’m going to work with Christoph Eschenbach many times next year, which is very exciting for me.  I think is very beneficial for a young artist to have the chance to meet this great maestros, I recently met Daniel Barenboim, who has been of huge inspiration. These people are geniuses and I’m learning so much from them.

What is your preferred repertoire?
I love to play as a soloist with orchestra. I feel very comfortable in this repertoire and is what I do the most throughout the season. I love to have this mass of sound behind me. Some people feel freer playing chamber music or solo instrument. I think you have a lot of freedom with every orchestra and conductor, and each time you are able to tell a completely different story, it is after all chamber music but in a very big scale!

Are you interested in contemporary music?
Yes, of course, but so far I get not too often the chance to play it. I want to incorporate slowly more contemporary repertoire. Next year, I’m thinking of putting something new in every recital. I still need to find music which I can personally get close to.

Now let’s speak about your instrument.
I am so lucky to play a 1696 Stradivarius ‘Lord Aylesford’ from the Nippon Music Foundation. I got this cello two and a half years ago. It was once played by Janos Starker… and before him by Gregor Piatigorsky. I know that I won the lottery by having this instrument. This is an incredible cello. It sounds good in every register. The base is extremely round and deep. I don’t know how Stradivari could create such an instrument. He was a true genius.
At the same time, this instrument is also a very tricky cello to play. It’s very complicated to use. But it has a lot of personality. You have to adapt to it very much. Since the last few months, I’m feeling very comfortable with it.

Do you speak with the cello after the concert?
Sometimes, after the concert I say “Sorry for that” (He laughs). And sometimes, it goes great and I say “Thank you for that.” But to be honest I don’t talk too much to it.

Do you think that the instrument has maintained the prints of the older instrumentalists, like Starker in your case?
I wish there were any prints left on it, but unfortunately it doesn’t have any memory I feel. They don’t help you this kind of instruments if you don’t know how to take advantage of what they have to offer.

Is recording important for you?
I’m actually looking for new possibilities. I’d love to record soon, maybe in the next couple of years. I think something will come up. I’m very much looking forward to it.