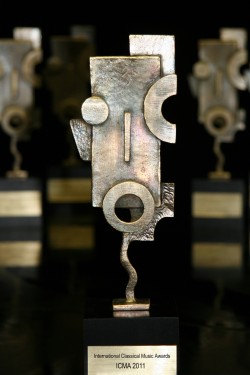 The Jury of the International Classical Music Awards – ICMA is happy and proud to present the winners for 2013.

« The ICMA Jury comprising 17 leading media from 13 countries selected 15 CD and DVD productions among a total of 275 nominations. The winning releases, far from being commercial mainstream, are a selection made without any national motive and therefore provide reliable guidance to the global audience. The ICMA also include six Special Awards paying respect to exceptional musicians and producers. All this Awards  are the expression of our jury’s aim of making the difference between good and exceptional, » said Remy Franck, President of the Jury.

The renowned pianist Aldo Ciccolini wins the Lifetime Achievement Award, German violinist Carolin Widmann is Artist of the Year. Considering two categories, Vocal and Instrumental, the Jury chose Romanian Countertenor Valer Sabadus and Italian pianist Alessandro Mazzamuto as Young Artists of the Year. The German label Audite is Label of the Year. A Special Achievement Award goes to the producer and founder of the Swedish label BIS, Robert von Bahr as well as to the Orchestra LaVerdi in Milan. ‘www.philharmonia.co.uk’, an outstanding website with plenty of innovative features, wins the Classical Website Award 2013.

The Awards of the 15 CD and DVD categories follow in a list at the end of this press release. Among the recipients of those prices, the Jury will select the Recording of the Year, to be announced at the Award Ceremony.

The winners will receive the ICMA Trophies during the annual Award Ceremony taking place this year in Milan, Italy, on March 18. This evening will also include a Gala Concert at the Auditorium, with the participation of ICMA winners and the Orchestra LaVerdi conducted by Principal Conductor John Axelrod. Through the European Broadcasting Union (EBU), the concert will be available to radio stations all over the world.