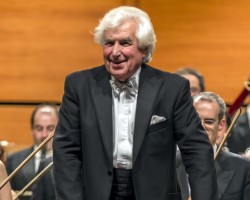 For his recording of Stravinsky’s ‘The Firebird (in the Melodiya box Les Ballets Russes) Dmitrij Kitajenko won the ICMA prize in the category ‘Historical Recording’. Backstage, Radio Orpheus’ Roman Berchenko made the following interview with Maestro Kitajenko.

Maestro, let me first of all congratulate you on behalf of ICMA for your award. Do you remember any circumstances of your Firebird recording? Where did it take place? Who was its initiator?
Thank you! It is very pleasant that this recording is recognized and awarded a prize after such a long time. As it was made about 29 years ago, I don’t remember all details of the recording, but I remember well that recording took place at Studio Five of the Broadcasting and Recording House in former Katchalov Street in Moscow. As every recording at that time, it was produced by Melodiya. The project was a very interesting one, and we produced it with Melodiya’s outstanding sound engineer Sergey Pazukhin. The work went on very quickly, effectively, and the result was very good, as it was confirmed today. 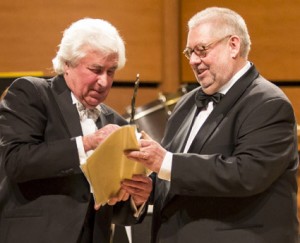 Did you communicate with the management of Melodiya before or during recording, or later, while they were editing?
Of course, no recording was made without preliminary discussion with the Melodiya management. These people were well-educated and creative, they loved their work – particularly General manager Valery Sukhorado. Normally, we planned our work years ahead. I recorded Stravinsky a lot at that time and later. I was so deeply impressed by the sheer richness of Russian colors in his music that once I went by car to Ustilug where he was born, just to breathe the same air that he breathed.

You said once in an interview that live concerts are your unconditional priority in comparison with studio recordings. Nevertheless the numbers of your recordings is very impressive, particularly in the field of Russian symphonic music. Your Cologne recording of the complete Shostakovich symphonies won a MIDEM Classic Award and the ECHO Award in 2006. You also recorded the complete symphonies of Prokofiev, Rimsky-Korsakov, Scriabin, Rachmaninov and Stravinsky. You continue recording Tchaikovsky’s symphonies… Have you any special rules or methods for working in a studio?
First of all, I do my best to create emotional incandescence and a salutary  nervous tension for me and for the orchestra, in order to come as close as possible to a concert atmosphere. Secondly, in recent years, I learned to distinguish immediately a well-done recording fragment from a bad one, so I don’t waste time to listen again what was recorded. I know exactly which piece or a part of it has to be re-recorded, and that saves a lot of time.

Which studio is the most comfortable for you?
Any studio where a good recording can be made.

Which of your recordings will we hear in the nearest future? And what are your more distant plans in this field of activity?
Together with Gürzenich Orchestra I work on a full cycle of Tchaikovsky’s symphonies, including the unfinished Seventh which was completed by Semyon Bogatyrev. We performed it in Cologne and, to be honest, I was quite concerned about the possibility that listeners would expect something incredible and higher after the Sixth, Pathétique… But people took it enthusiastically. I hope the recording will also be successful. It will be released together with Tchaikovskys Third Piano Concerto with soloist Liliya Zilberstein. I would like to finish this cycle with ‘Iolanta’, Tchaikovsky’s last opera. 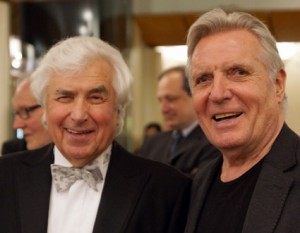 If you were allowed to keep only one from all your recordings, which one would you choose?
Rimsky-Korsakov’s ‘Golden Cockerel’.

And if you had to choose one work from the whole repertoire?
There are two composers connecting immediately with soul and heart: Tchaikovsky and Johann Strauss. I would like to save them for the future first of all.

You communicated a lot with Herbert von Karajan. He teached you and you won prize in the very first competition of young conductors organized by Karajan in 1969. What do you mainly remember from his personality. What was the most important thing he taught you?
First for all I learned from him the simplicity of communication with orchestras, concreteness in rehearsal, selection of sound quality and all the colors needed. Once I conducted ‘Don Juan’ by Richard Strauss. Karajan happened to attend the rehearsal. He came to me and said: « My dear colleague Dimitry, please remember that each work has only one climax. It may be silent, it may be pause… So, don’t behave like a dog walking out and stopping under every tree!”.

Next year will be the one hundreds anniversary of Kirill Kondrashin. You were his successor as chief conductor of the Moscow Philharmonic Orchestra. Did you have a close contact to him at that time, or later? What are your most vivid impressions of Kondrashin?
Kirill Kondrashin is a great figure in our music history, he brought many works from Western composers to Russia, first of all the music by Gustav Mahler. He was very demanding, very precise in his communication, but also an easy-going man. He spoke with me as a colleague, not as an older and experienced conductor. I watched him working a lot during rehearsals and concerts. He had a great humor. But his life was not easy, as he had constantly to overcome problems and barriers.

You toured all over the world with the best orchestras. Which concert hall is your favorite one?
That’s a very individual, subjective question. For me, if the concert was a success, the hall is excellent.

You have been teaching  a lot earlier in your life. Famous contemporary Russian conductors are your pupils: Dmitry Liss, Vladimir Ziva, Igor Dronov… You are a jury member of the ‘International Malko Competition for Young Conductors’, headed by Lorin Maazel. Whom of the new generation of conductors did you discover in recent years? Who is following you?
The marathon of young conductors started in recent time. Some of them lead, others remain behind. But for all of them three items are particularly important: CD, DVD and a mirror. Of course, Gustavo Dudamel is a great talent, but some of his professional manners put me on guard – maybe he has not always enough time to really sink into the score. Among contemporary Russian conductors of next generation I would like to point out Dmitrij Liss. I just wish him not to suffer under dictatorship of time, because nowadays you are supposed to do a lot of things very quickly. When I was young, we played all the entire scores ourselves at the piano, researched and listened a lot. There were no superstars, no shooting stars. There was outstanding composer Shostakovich, remarkable violinist Oistrakh…a number of others. But now you don’t know where to put your feet, without stepping on a ‘star’! I wish young conductors tenacity, staying power and the necessary time for immersion into the deepness of the scores.

And what are your three rules for better working?
First, always open a score like it was the very first time. Second: sit in silence, watch the nature. Third: no communication with technical resources which surround us, such as Internet, telephone, fax and so on. A conductor needs to get information by himself, not from a computer. He must try to continuously dig deeper in the music, deeper than anyone did before. Only with such a preparation you are able to stand in front of an orchestra and tell the musicians what you expect.

Is the music able to change the world?
No.

Is the music able to change people?
Yes, but in different ways. When you hear the remarkable counter-tenor Valer Sabadus, ICMA’s Young Artist of the Year, you feel like this voice comes from heaven. It cleans you. When I look at his face I understand that he is a man who serves the world. But I guess there is also music able to transform people into savages.

Please name the three greatest people in history, in art, in music …
The first is Peter the Great, Russian Tsar: high, strong, resolute, volitional, creator. The second is Botticelli: incredible thin lines, incredible light, and one can see real human beings behind the image. And the third is his friend Filippino Lippi.

It is very interesting that you don’t name musicians, composers…
When you are five years old, you like one composer and he leads you for several years. In my case it was Mikhail Glinka when I studied in Glinka Capella in St-Petersburg. Then you like another one. It was Grieg for me, then Liszt… They also disappeared… It would be a banality if I named Beethoven, Mozart, Bach… They are with me for all my life, of course. Of course I never would expel from my life composers who spent decades with me. Composers are partners of my life.

What would you change in your life, when you have a chance?
I would pay more attention to studying languages and avoid wasting time for chatter.

If you were offered to get back in time, which year would you enter in a time machine?
I would choose 1945, right after Second World War. I would like to return to the time when my parents were alive, when teachers did their best to teach their generation all they knew, when there were great lines for getting into the concert halls, when after the tragedy of war and all the terrible losses people were kind and when there was no jealousy.

What do you regret the most?
I regret that time is passing by so quickly.

What are you dreaming of?
I am dreaming of remaining in tail-coat as long as possible, of taking the baton firmly in my right hand, of my head being bright, of all my dear and beloved people staying with me as long as possible. My hope is also to live in a world where the evil forces of aggression, currently accumulated with high speed, could be stopped.

If the music didn’t exist, what would you do?
It is a sad question, but the answer is definite enough. I would dedicate my life to research. Research about the interaction of nature and animals. I would like to spend more time with animals.

Do you like them so much?
It is a necessity. My wife and I connect with animals very quickly, and our best friends are dogs, cats, birds, parrots, marmosets…

I think they sense you…
Yes, of course. Once I played piano with a dachshund, four hands. To be honest, I played better then she did…

Have you been a good teacher for her?
I was very patient.

Are you a happy person?
Yes, of course. But as a piano keyboard includes not only white keys but also black keys, one is not able to play all the time with white keys only, we need black keys sometimes.