The young Chinese flutist Yuan Yu has won the ICMA Discovery Award 2018. Yuan Yu is a student at the Conservatoire national supérieur de Musique et de Danse de Paris in the class of Professor Philippe Bernold, assisted by Florence Souchard-Delépine.In 2012, he won first prize in the children’s section of the inaugural China Flute Association. In 2015 he was given an honorable mention at the 67th International Prague Spring Music Competition.In 2017, at the age of fifteen, he was the winner of the 7th Krakow International Flute Competition. Later in the same year, he also won first prize at the 9th Kobe International Flute Competition.He loved performing since an early age, giving his first solo recital at the age of thirteen at the Central Conservatory of Music in Beijing. Yuan receives a scholarship from the International Academy of Music in Liechtenstein, and takes part in the intensive music weeks and activities offered by the Academy. Remy Franck and Isabel Roth spoke with the young musician.

When did you start playing the flute?
I decided to play the flute at the age of 7. From the beginning I liked the instrument very much. I also started to play the piano, but my mother was pushing me so hard, that at the end I disliked this instrument. But, becoming older, I appreciate the piano again. Fortunately, my mother gave me more freedom with the flute, so this was easier for me. 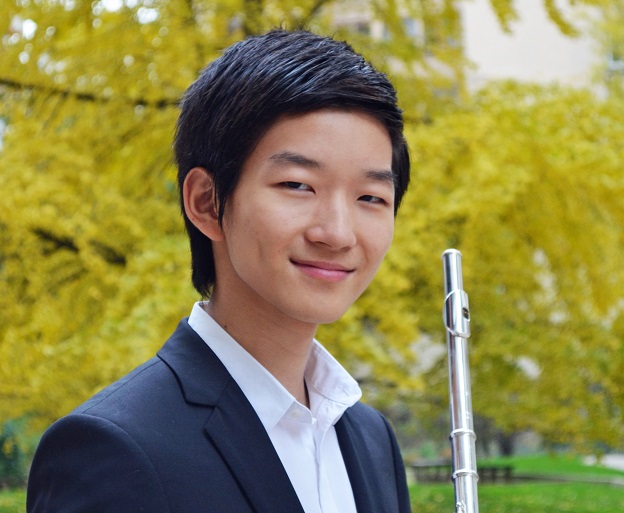 Is your mother a musician?
My mother plays a traditional Chinese instrument, the guqin, an instrument which is 3000 years old, even if it changed a little bit in the course of time.

How important is Chinese music for you?
I have been brought up listening to Tang Dynasty and Song Dynasty music at home on the guqin. I can even play some of these pieces myself. I think, a lot of modern Chinese music is very much influenced by Western music, so is not so ‘authentic’. But when you go back to the real Chinese music, you will find something very original and very beautiful, and I really like it. It is still not well known outside of China, so I hope more people will discover it in the future.

Was it difficult for you to get acquainted to Western music?
Actually, when I was four, I practiced the accordion, and for me, at that time, music was just fun. Nobody in my family would have thought that one day I would play music professionally. My parents really thought of me becoming a doctor or a lawyer. Yet, at the same time, my mother bought me a DVD with some 30 classical pieces by Mozart, Beethoven, Bizet and many more. It was presented in form of a cartoon and I loved it. Rapidly, Mozart became my favorite composer.

You are now 16 and attend the National Conservatory in Paris. Do you also attend a regular school?
Yes, I am registered at a French high school in Paris, and it is really difficult for me to manage both schools in parallel. I thought of quitting the high-school, but at the end, my parents and I thought that general culture is immensely important and I continued both types of education. And basically I really like it.

What does music mean to you?
Music is something you can’t touch or see, it’s made of emotions, and emotions are the most important thing in the relation between human beings. And even though the best technique is required, you will never be able to really make music when you cannot deal with the emotions and know how to control them.

You lived in Beijing for many years and then you arrived in Paris. What was the major change in your life?
The Conservatory! Everything is different from what I was used to. The Conservatory is absolutely great, and I have amazing professors. Now, Paris and Beijing are two big cities, but in Paris you are continuously exposed to culture. When I have some free time, I like to go to museums and also to concerts. Here you have every week some extraordinary concerts.

What are you studying besides the flute?
I study the piccolo of course, then also piano, composition, musical analysis, music history and chamber music.

What do you think when composers like Bright Sheng or Tan Dun mix Chinese and European music?
Today, you can communicate instantly with people being far away, so it’s absolutely normal that there is also a cultural melting. And even some hundred years ago, Puccini included a Chinese melody in his Turandot. It was quite a shock for me when I listened to this opera, I was amazed to discover that. So, when I hear music mixing both cultures, I am totally happy with that, I feel at home.