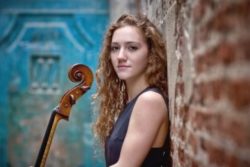 The young cellist Erica Piccotti, born in Rome in 1999, is a talent with an already well-established career. Nicola Cattò, ICMA Jury member for the Italian magazine Musica and Secretary General met the Young Artist who won this year’s ICMA Young Artist of the Year Award.

How did you come to study the cello? Which are the main steps of your training?
It was a natural path, because at home I have ‘breathed’ music since I was little, my mother plays the piano, my brother the violin. After having ‘played’ with these two instruments, one day a cello came home. I was four and a half years old, and here I am! My first teacher was Francesco Storino, cellist of the Orchestra di Santa Cecilia in Rome, whom I was lucky enough to meet when I was part of the JuniOrchestra of the same Academy. He took me by the hand as a child and with passion and dedication made me grow, the same passion that I then transmitted in my music. He followed me until I graduated from the conservatory, but even now he remains a point of reference for me. I continued my studies with Antonio Meneses, a great cellist for whom I have always had great admiration, first at the Hochschule der Künste in Bern and then at the Walter Stauffer Academy in Cremona and the Accademia Chigiana in Siena.
I have currently fulfilled another dream of mine by studying with another great cellist and teacher, Frans Helmerson at the Kronberg Academy. This academy introduced me to an international environment and allowed me to be in touch world famous artists.

When did you realize that your future would be music and the cello?

I became passionate about the cello and music from the very beginning. The first achievements in competitions then encouraged me to do better and better. They gave me the confidence to reach new goals and so on. I can’t remember the exact moment when I realized that music would be part of my life forever, maybe it never was! I think I was always aware that only this one would make me feel certain emotions, which I would not want and could not live without.

Are there any cellists that you consider a reference?
I must mention Antonio Meneses, who is elegant, refined, and always perfect in his performances. What has always delighted me about him is the meticulous work behind each of his notes, the cleanliness, the clarity, the expression of everything he plays. And of course the impeccable technique with which he manages to achieve all this with the utmost naturalness. Another example is Mario Brunello. He is able to express things that cannot be expressed in words. While he plays, he speaks his own language that is understandable to everyone at the same time.

You recorded your first CD with a major label when you were only 18 years old: what did it mean for you?
This is certainly one of the most important goals. It’s not just a CD, I think it was a real moment of growth for myself. A great challenge, a very demanding work, but the emotion I felt while listening to the final master… that I will never forget! It’s an important step in my growth, it represents who I am right now. I thank the Associazione Musica con le Ali that supported me in this project and Warner Classics that gave me confidence.

How did you choose the program? Does it reflect your concert repertoire?
The program was chosen in agreement with Itamar Golan. He proposed me Franck’s Sonata, which I love very much and which I performed several times in concert that year. So I immediately accepted the proposal with enthusiasm. Then we decided to add two pieces by Russian composers and the choice fell on Prokofiev’s Sonata and finally, on my proposal, we decided to add Stravinsky’s Suite Italienne, which then became the opening piece of the record.

Tell me about your collaboration with Golan.
With Itamar there was immediately a great artistic understanding. He is a great chamber musician and has played alongside illustrious artists, so working with him was very stimulating as well as rewarding. The instinctiveness in the way we play is what bound us from the very first moment, that magic that makes it seem, to the listener, all random and that in reality has already been planned and established, but with the variable of the mood of the moment. And the great thing is to capture just that moment of the other and make it our own: I think we have succeeded. 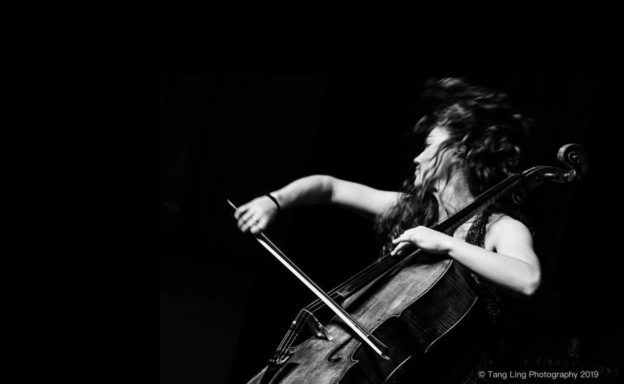 But do you have privileged chamber partners?
In addition to being a soloist, I love performing in chamber ensembles. Sometimes I play with young people of my own age, but also with established artists. I find both situations very stimulating. It was from one of these meetings that the collaboration with Itamar Golan was born, which led to the realization of the CD.

What instrument do you play? What characteristics does it have?
I have the privilege to play a magnificent instrument of 1692, a cello Francesco Ruggeri, kindly granted to me by the Fondazione Micheli through the Fondazione Pro Canale. We met more or less 3 years ago and I must admit that love did not immediately blossom. These instruments are like people, you have to learn to know them and respect them. I discovered it little by little. Now I couldn’t part from it, we found the perfect harmony.

How did you cross Associazione Musica con le Ali? How is that helping you?
It happened at one of my concerts, at the Arvedi Auditorium in Cremona. A great understanding was born between us right away. I consider myself very lucky because already in the past other Associations have supported me with generous scholarships such as the De Sono, which allowed me to study abroad for three years, or like the Bobo Foundation, which also lent me important cellos. Musica con le Ali has an extra peculiarity, because in addition to allowing me to make this CD, it helps young talents to « take flight » by providing them with personalized help according to their specific needs, helping them in every aspect of their activity and creating numerous opportunities for professional growth.

You already have a fairly busy concert schedule: is it difficult to go from enfant prodige to adult professional?
Although many people have called me an enfant prodige in the past, I have never really considered myself so. As you become a professional, your commitments and responsibilities increase. Sometimes I turn back with a bit of nostalgia for that period of childhood spent in total carefreeness, but the satisfaction I feel now repays me for everything.