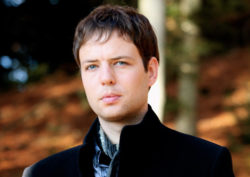 The very first of ICMA’s Composer Award goes to the Spanish composer Francisco Coll (*1985).Coll was formed in Valencia and Madrid, but in 2009 he became the only private student of British composer Thomas Adès. He completed his studies at the prestigious Guildhall School while beginning an impressive international career as a composer with commissions for the London Symphony, the Los Angeles Philharmonic, Ensemble Intercontemporain and the London Sinfonietta, among others. Pablo L. Rodríguez from the Spanish ICMA Jury member Scherzo made the following interview with the awardee in his current hometown Lucerne (Switzerland).

How does one become a composer today?
In reality, I never thought about being a composer. In my case it was completely irrational. I remember perfectly the first time I wanted to compose something. I was tired of hearing the same thing from my Walkman and I chose to record something created by myself with instruments that I could play. I must have been about fifteen years old. It was a way to make the music I wanted to hear. And that’s, in a way, what I’m still doing today. Obviously that piece was a disaster, but it was an attempt.

You played the trombone, and I think Christian Lindberg was your idol.
My father took me to see him play at the Palau de la Musica in Valencia when I was twelve years old. Lindberg played as a soloist a work for alto trombone by Wagenseil or Albrechtberger with the Valencia Orchestra. And that was the first time I heard an orchestra live. But I remember that Lindberg played as an encore a piece entitled Bocetos de la Mancha, by Jan Sandström. That showed me that there was another way to make music. And I became also interested in Cage’s music.

I understand you also like to paint.
Yes, my father had a small frame shop. I grew up surrounded by paintings. Today I make a painting every time I compose a work. Sometimes I don’t know if I’m composing or painting, because I don’t see much difference between painting and composing. Even the process of composing is similar for me to painting. Instead of focusing on a fragment, and refining it with oil, what I do is a quick sketch with charcoal, then add a watercolour, then a more refined colour and finally I focus on the final touches before finishing the work. In composition I do practically the same thing. I usually compose very quickly, because I have the feeling that the final result will be more organic, more fluid and will have a more convincing rhetoric. But I don’t think I am inventing anything new. 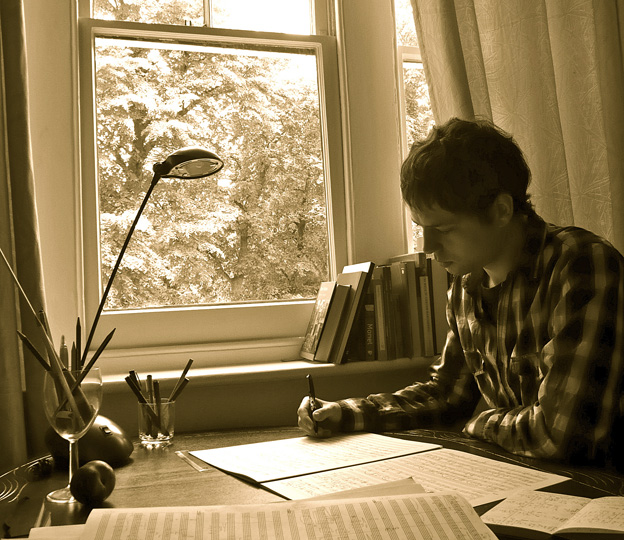 Let’s talk about your work. Your first commission was a Double Brass Quintet that premiered in 2005 at New York’s Avery Fischer Hall.
It was a simple compositional exercise that has a more personal than a professional meaning, as it was based on improvisations for my grandfather, who had just passed away at the time. By a series of coincidences, the work ended up as a Double Brass Quintet in New York, for Canadian Brass and members of the New York Philharmonic, although I didn’t even go to the premiere.

Then came Aqua Cinereus in 2006.
I wrote that work for Cristobal Soler and the Philharmonic Orchestra of the University of Valencia where he played the trombone. It wasn’t very successful, but I sent a recording to Thomas Adès and he invited me to study with him in London. It was really the beginning, although in those years I wrote other compositions that allowed me to win some competitions and go to study in Madrid.

Which works did you start working with Thomas Adès in London?
I was supposed to stay in London only for one year, but I received some commissions and I was able to stay. The first composition on that I worked with Adès was the overture Hidd’n Blue (2009-11), commissioned by the London Symphony, a month after my arrival in London. It was premiered by François-Xavier Roth and has had a lot of international repercussion thanks to Gustavo Gimeno. Then I wrote Piedras (2009-10) for the Los Angeles Philharmonic, although its origin is also related to a class with Magnus Lindberg in Aldeburgh, who proposed that title to me.
In 2013 I wrote my first opera, Café Kafka, which is now absorbed in the second. I didn’t plan to write an opera, because I didn’t know that world very well. Actually, Café Kafka is a short opera. It was a commission from the manager of the London Sinfonietta to which several theatres and festivals were added. But thanks to this work I got into opera and now I’m writing the second one for the 2020-21 season of the Royal Opera House in London, which will have a normal duration. I’m back with Meredith Oakes as a librettist and it’s based on Dostoyevsky’s The Dream of a Ridiculous Man.

I see that is a recurrent theme in your work.
Surrealism is something that I consider part of me. I don’t feel like a surrealist composer, but I have used Breton’s automatic writing technique to compose Piedras. I am interested in many aspects of surrealism.

Another recurrent element is sociology, with allusions to hypermodernity in several of your compositions.
When I finished high school, I became interested in sociology and Lipovetsky, whose games of opposites attracted me quite a lot as a composer. Based on his hypermodernity I wrote a series of preludes for violin solo which I called Hyperludies (2014). I have also used Zygmunt Bauman’s famous concept of liquid society in my work Liquid Symetries (2013). 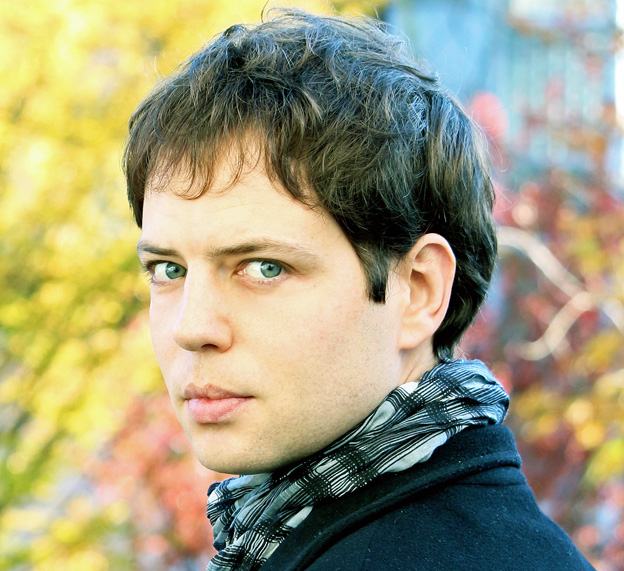 The oneiric and the sociological come together in your symphony Mural (2013-15).
Perhaps it is the composition that best agglutinates my first decade. It even quotes Tomas Luis de Victoria. Mural begins with a surrealist presentation and I use my Hyperlude III for solo violin, in the second movement, as a reflection of the current frenetic rhythm. Indeed, in the fourth I include some details of the introit from Victoria’s Requiem in the manner of ruins and as a sample of contemporary decadence. That use is related to Picasso’s famous phrase about copying and stealing. I didn’t really understand that phrase until 2013, when I composed Four Iberian Miniatures and ‘stole’ two bars of Lorca’s Anda Jaleo. I digested and vomited them, transformed into something different.

Let’s talk about the influence of flamenco in your work.
I discovered flamenco by rebelliousness towards a solfeggio teacher. I instinctively related it to the use of popular music as did Bartok or Ligeti. But I didn’t manage to integrate it into my work until the Four Iberian Miniatures. Then I used it again in my Concerto grosso (2016), which I wrote for the twentieth anniversary of the Casals Quartet with the National Orchestra of Spain. And again, in Turia (2017), for solo guitar and ensemble, perhaps my most flamenco-coloured work, although it is a transfigured flamenco mixed with very different aspects.

Turia is perhaps your most Valencian composition.
I have been away from Valencia for eleven years and only in 2017 I have I been able to write a work like Turia in homage to an almost surrealist river, which has no water. You walk through it, it has gardens and even an opera house. Anyway, the work is a tribute to the light of Valencia, like Joaquín Sorolla y Bastida painted it, and that I wanted to capture in my music.

And what about your latest works?
In July 2018, Patricia Kopatchinskaja and Sol Gabetta created a duo for violin and cello, Rizoma. And then I have developed the material from that into a double concerto for both of them. The first performance will take place in June 2019 at Kloster St. Peter auf dem Schwarzwald in Germany. And I am writing a violin concerto for Kopatchinskaja, with whom I share many ideas about music and art in general. The concerto – which will be premiered by the Orchestre Philharmonique du Luxembourg under Gustavo Gimeno next February – has been co-commissioned by the OPL & Philharmonie Luxembourg, the NTR Zaterdag Matinee, London Symphony Orchestra, Seattle Symphony and Bamberger Symphoniker.