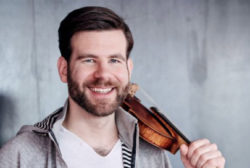 Currently based in Paris, Italian violinist, conductor and record producer Johannes Pramsohler and his Ensemble Diderot won an award in ICMA’s category of Baroque Music with The Berlin Album, works by Benda, Graun, Janitsch, Kirnberger, von Preußen and Schulz (Audax ADX13726).
Born in 1980 in Sterzing in the autonomous Italian province of South Tyrol he studied in Bolzano, in Paris, at the Mozarteum Salzburg, at the Guildhall School of Music and Drama and at the Royal Academy of Music in London.
Often invited as guest concertmaster, Johannes Pramsohler led orchestras such as The King’s Consort, Le Concert d’Astrée, Concerto Köln, Arte dei Suonatori, the European Union Baroque Orchestra and the Helsinki Baroque Orchestra. He is founding member and artistic director of the London-based International Baroque Players and of the Ensemble Diderot
He also founded the record label Audax. ICMA Jury member Maciej Chizynski (ResMusica) made the following interview with Johannes Pramsohler

A few years ago, you started your own record label. Why?
You know what? Sometimes I ask myself the same question. Having a record label presents a huge amount of work on top of what I’m doing as a concert violinist. But I think without Audax Records I wouldn’t be able to do all the projects I’m doing – anyway not in this way and definitely not at this speed. My wish is to not only record music, but to draw people closer to the fascinating world of sounds that I care so much about. My idea is to give more insight into works and composers and to provide a structure for the music that enhances it, that doesn’t just sell it as a commercial product but as an experience. By getting better informed about the music the listener can appreciate it more. That’s why we work with some of the world’s most respected musicologists, we keep close contact to music libraries and institutions, we try to push each other to dig even deeper, to get a really thorough understanding of the music we’re recording and how we want to present it. I saw that I can only do these things when I build my own label. It’s been a crazy few years with an extreme amount of work. Establishing a label also means learning about the challenges that each new project brings. But it all starts to pay off. Almost every day I receive requests from great musicians who want to record with us and who want to become part of the Audax family. I managed to build a fantastic team around me with creative people who are bursting with positive energy. Lately I also signed a few new, selected artists to the label that play music that I would never touch – and it’s extremely exciting to delve into their world and take them with us on the Audax journey.

How did you conceive the Berlin album project? Was there any idea that the album was created after the albums London and Paris? 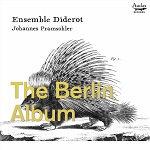 All our cities albums start from single pieces. With the Dresden album we wanted to present two of the three trio sonatas that Handel probably left in the capital of Saxony in 1719 and looked for other significant pieces written for the Dresden virtuosos. For London, the starting point was Purcell’s Trio Sonatas which we wanted to play in a new way, and for Paris, the first focus the first focus was on Couperin. The Berlin album actually started with a work that didn’t make it onto the album in the end because we found so much unknown music: CPE Bach’s famous trio sonata Sanguineus & Melancholicus. In this album we wanted to explore the extremely exciting musical life in Berlin at the time which saw the emergence of the first public concerts and we wanted to show that there was also a Berlin without music by CPE Bach, or for flute.

Are you planning to continue with the city series?
Yes, we are. But all our programs take several years to develop, and we have lots of ideas, so our fans might have to wait for a little bit until the next city album comes out and – to some almost more important: which animal there will be on the cover! For the moment we’ll keep our lips sealed.

How much time do you spare on looking for past and unremembered compositions? Are you looking for specific pieces or is finding forgotten music a matter of chance?
I am never consciously looking for forgotten or unrecorded works. I think at the moment we are moving towards a silly fashion where ‘world premiere’ is becoming the new ‘on authentic instruments’ – a slogan that had as its purpose to set recordings that are historically informed apart from the mainstream. For me it is an empty formula that doesn’t guarantee quality neither of the music nor of the interpretation. I’m constantly wary of this, even though our publicists tell us that the press loves the label ‘world premiere” – we try to use it more sparingly because it wears itself out in a way.
My only interest in my work with the Ensemble Diderot is to understand the 17th and 18th centuries better and to present my findings to the audience. What did the composers mean with what they wrote in the score and how should we perform it today? On this quest I often encounter composers that have been forgotten or works that I find interesting. But I never go into a library solely looking for unknown stuff – which is actually an easy thing to do if you’re not too bothered about the quality of the music. But doing it in some sort of musicological and interpretive context is challenging and therefore much more exciting and rewarding. Lots of music in the 17th and 18th century was music to be listened to once… and we have to be very careful nowadays to stylize not so great pieces into major repertoire works

You devoted one of your latest projects to opera. Are you willing to continue your activities in this direction?
I love working with singers. Especially we ‘early musicians’ are drawn to the voice in a special way and get lots of information and inspiration from it. Every treatise speaks about how instruments should strive to imitate singers. Opera productions are a great way for the ensemble to get a change of scenery from instrumental music and to delve into the crazy world of theatre.
I have to admit that I’m often accused to have a different taste in singers than the mainstream baroque world. Sometimes my CDs get criticized for my choice of singers that doesn’t seem to fit to baroque expectations. The problem I think is that the world of the historically informed performance has often very strange views on how baroque music should be sung. And if we analyze history we can actually see that our weird obsession with straight sounding voices with no body that become shaky at the slightest technical challenge stems from a perception of an authentic sound that has most probably very little to do with historical facts. Somehow over 30 years ago the English cathedral style became established as an international sonic norm for Early Music and the model on which Early Music vocal production in all ranges is based and I am continuously doubting this and questioning it. Therefore it is vital to me to keep working with great singers and to explore different ways of doing things, just as we do with our instrumental music. It’s a really fascinating world!
With Ensemble Diderot I therefore focus on an approach that starts from the ensemble – we rarely do aria programs and we never act as simple accompanying band for singers. So long story short: yes, there will be more opera projects! I also started quite enjoying conducting without my violin recently, but I still want to learn a lot in that field. 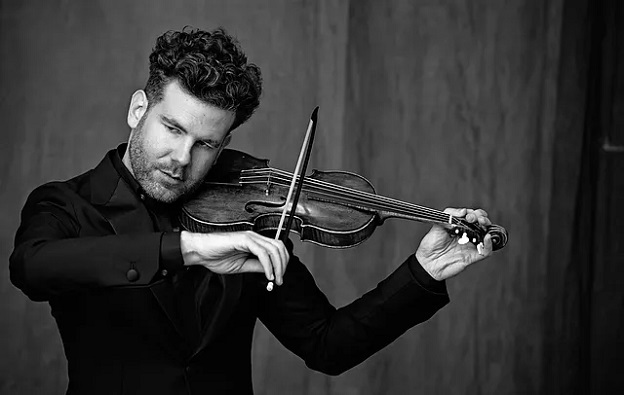 What specific projects do you plan to focus on now?
First of all we are continuing to focus on the development of the trio sonata as the backbone of our work. It’s somehow our laboratory for all other projects where we experiment and grow technically and artistically as a group. We will also explore more repertoire just outside of the trio sonata – slightly bigger scorings as for example the album we just released with Sonatas for three violins.
Our big project this season continues to be Bach’s Musical Offering which we perform with three giant video screens. The music is perfectly synchronized to stunning videos by Pierre Nouvel that provide an additional dimension in order to give a multi-sensorial experience to the audience. We recently recorded it with Dolby Atmos technology and plan to release it as video album with immersive 3D sound later this year.

Audax publishes your own and your ensemble’s albums, as well as ones by other independent artists. What is the criterion for their selection?
Somehow all Audax artists have a relationship with the Ensemble Diderot. Most of them regularly play with us – even if it might at first not seem so. Jadran Duncumb and Philippe Grisvard who also do solo albums on Audax are Diderot regulars whereas Philipp Bohnen from the Mariani Piano Quartet or Marie Radauer-Plank from the Duo Brüggen-Plank join us as baroque violinists for bigger orchestra projects. The most important requirement for becoming part of Audax is that they share our sense of discovery and thirst for presenting unknown music or for going extra deep into new ways of performing. Right now I had to put a stop on accepting new artists as we reached a point where I think we wouldn’t be able to handle more recordings the way we want. I care a lot about being involved in every project, I’m proof-reading the texts myself in four different languages and sometimes even translating them myself. I’m in constant contact with our graphic designer, digital and physical distributors in the whole world, our publicists in Germany, the UK, France and Spain, the artists’ management teams, etc. Recently we started our own Audax blog. The force of Audax Records is also that each and every project gets its space and proper attention. Therefore we need to keep it small. I owe this to the artists.

How did you receive the information about winning the ICMA? What does this award mean to you?
I got the information from our German PR and we were all over the moon. After several nominations since the very first Audax CD, winning this ICMA award means a lot to us. We see it not only as a reward for our work but also as incentive to keep going and doing what we like most: making music.