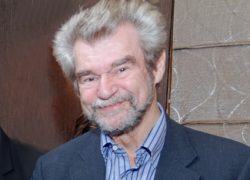 The Swedish label BIS is Label of the Year of the International Classical Music Awards. Known for the quality of sound and music, for a substantial catalogue of more than 2.300 titles and some exciting projects, the label is a strong player on the international market. Remy Franck made the following interview with the label’s CEO Robert von Bahr.

Robert, what was the starting point for your business?
When my first wife, the flutist Gunilla von Bahr, wanted to release a recording, I wrote to a couple of labels, and at first we got only refusals. So I decided to make the recording and to try again. I wrote another round of letters and got again either no answer or a refusal. However, one label agreed to publish the disc under the following conditions: We had to provide the master tape, the text and the photos free of charge, we got no royalties and moreover, we had to buy 500 discs at full retail price. Since there was no alternative, we accepted the proposal. At the end we were able to sell our 500 discs quite rapidly, and the label also sold a lot, approximately 4.000 pieces in half a year. Then the label asked us to produce a second recording. I told them: Yes, we will make a second recording, but by ourselves. And we created BIS.

Where did the name BIS come from?
Well, I thought it was a name which one could easily pronounce in all the languages. There was obviously also the musical connotation, with the most pleasing meaning of an encore, and, furthermore, my great-grandfather was a music critic in Finland and used the pen name BIS.

When you launched BIS you were still a student…
Yes. I had studied law at the University of Stockholm and vocal coaching as well as music teaching at the Musical College. However, with BIS taking more and more from my time, I had to stop the studies. 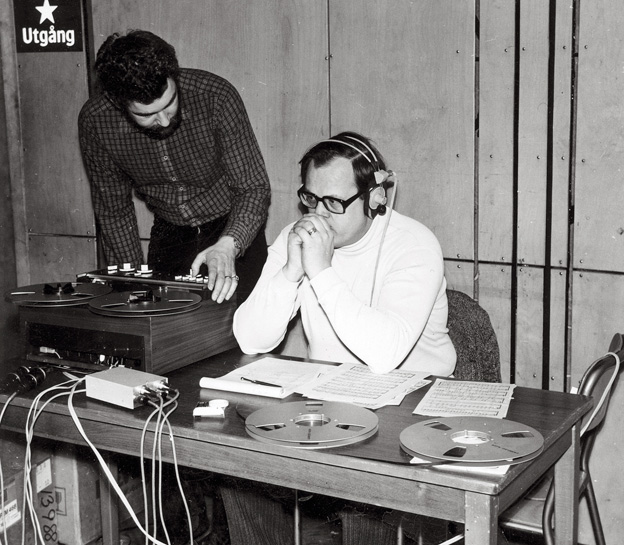 Klaus Heymann also created Marco Polo and Naxos to give his wife Takako Nishizaki a recording company, but there was another idea behind too, as in your case also, I suppose.
My aim was and is up today still the same: to promote unknown artists and unknown music. The commercial idea was to create an unusual repertoire, something that you would not find on every other record label. Of course, since 1973, we also recorded some Mozart and some Brahms…

Which criteria do you have to make a selection? There are so many unknown artists…
Well, most of the unknown artists are unknown for a good reason. And the really good ones are not so numerous. And we were lucky enough to find really outstanding musicians.

Was it difficult to get into the market which, obviously, was very different from the one we know today?
It was a heavy task, indeed. Heavy also because the LP had a weight of approximately 200 grams. And since I was my own distributor at that time, I crossed Stockholm with two suitcases full of LPs to sell them to the various stores. The most annoying thing was that, at the time, in Stockholm’s subway, you had to pay a ticket for each suitcase. I studied the regulations closely and learned that unlike the suitcase, the transportation of a baby pram was free. And there was no indication what had to be in the buggy…So I bought a big pram, put my records in it and went to the shops. I was known soon as the label man with the pram, and when the Swedish television made a TV feature about me, the commercial success went growing… 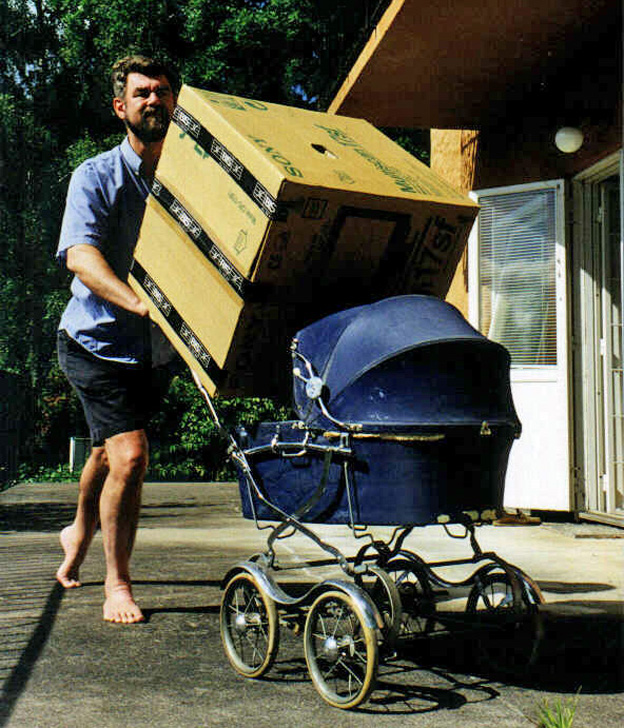 What are your key projects?
The complete works by Sibelius was certainly our most important project. We released everything, all the published and unpublished works, all the sketches… This has a family background. My great-grandfather was not only a music critic, he also was a viola player and a friend of Sibelius. He premiered several of his works and published a lot. His father was a violin maker and worked for Sibelius. My grandfather was a cellist and he also premiered some of Sibelius’s compositions, and my mother was a ballerina and danced in several ballets by Sibelius. But, besides this, I really love the music, and so we undertook this huge project which lasted for almost 30 years.
The other important projects are the Complete Bach Cantatas by the Bach Collegium Japan under Masaaki Suzuki, and the two cycles with the music by Alfred Schnittke – who was a friend of mine – and the music by Kalevi Aho – who is a friend of mine. 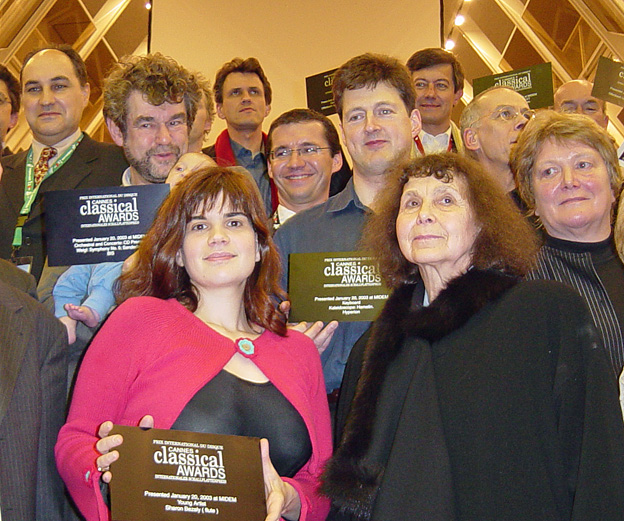 Cannes Classical Awards 2003: With Sofia Gubaidulina, who dedicated her Flute Concerto to Sharon Bezaly, both getting the Award.

Among the artists you helped to launch a recording career, a certain number quickly became really famous.
Yes, I’d like to mention my wife, the flutist Sharon Bezaly as well as the Russian pianist Evgeny Sudbin, who is a genius. He did send us a private CD ten years ago. I gave it to my Artist & Repertoire manager and told him: We have already too many pianists, you may listen to that CD, but you will write a polite refusal. Then he called me the same day and invited me to listen to the music together with him. That’s what we did, and after some 15 minutes of listening we decided to offer Sudbin the second exclusive contract with BIS. Sudbin is pure music. It’s not only about technique, it’s especially about music, about inspiration, about fantasy. Listen to what he plays, and the sun will rise.

So you are one of the very few labels still employing an Artist & Repertoire manager?
With Robert Suff we have an outstanding A & R manager. With him we plan our recordings several years in advance, so that we can have a coherent release policy. Our team employs seven full time people and several free-lancers.

So you produce everything by yourself?
Yes, with some rare exceptions. It’s the only way to keep up with the quality standards we have set up.

You are one of the defenders of the surround sound.
It’s our duty to sell the recordings for which the artists invested so much talent, in the best possible sound. And we sell the hybrid SACD at the same price as the CD.

Today, the time where you would sell a recording in a pram is over. And some people even say the physical CD will die someday. Do you extend your market to download and streaming?
We use everything, the physical CD or SACD, Download in high res, including surround high-res, Streaming, preferably platforms who provide high-res, and after a one year-delay from the first release also the normal streaming platforms. Most important is our own Internet shop e-classical.

Can one still earn money with a recording company?
We are still a strong company. We have over 2000 written-off recordings in our back catalogue, and the sales from this back-catalogue are important. There are also other possibilities to sell the recorded music, back-ground music for movies for instance, radio broadcasts and sometimes we even get some official funding. So yes, we still earn money, but really not that much. 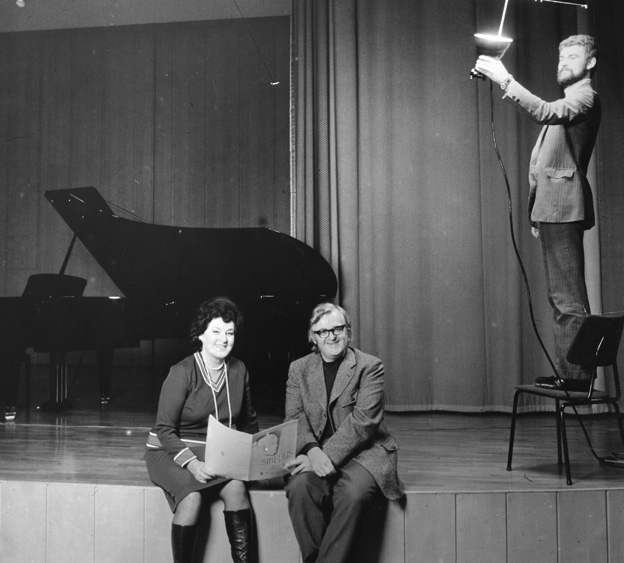 Birgit Nilsson and János Sólyom, January 1975, with Robert von Bahr  in his most profitable participation as lamp-post

Does the physical CD have a future?
I think so, but the quantities will continue to diminish. On the other hand I see that the vinyl disc is making a reappearance. And, frankly, I don’t understand that. It’s bad quality and it’s fragile. And considering the fact that some vinyl discs are made from a digital recording, the only argument to have an analogue chain from the beginning vanishes.
The CD will continue to exist, but the streaming will play an increasingly important role. The streaming platforms do not pay a lot, but the quantity of sold music is much bigger.

In former times, there were only a few labels able to sell ten thousands of copies. Today we have hundreds of labels, but they sell much less.  What is for you a successful CD sale?
3000!

And how often do you reach such a number?
Seldom!

What are your best markets?
Great Britain, Benelux, Japan, USA, Germany, in that order.

Interesting! Other labels tell us that Germany is their moist important market. Is this about your special repertoire?
You think of Bach? (laughs). Maybe Germans avoid a little less known known projects. But we cannot generalize, and the German market is very important for us.

What about China?
It’s a difficult market, so promising it might look. You can only sell licenses, since the Chinese continue to produce their own discs. The export of physical CDs to China is a nightmare. Nearly impossible. 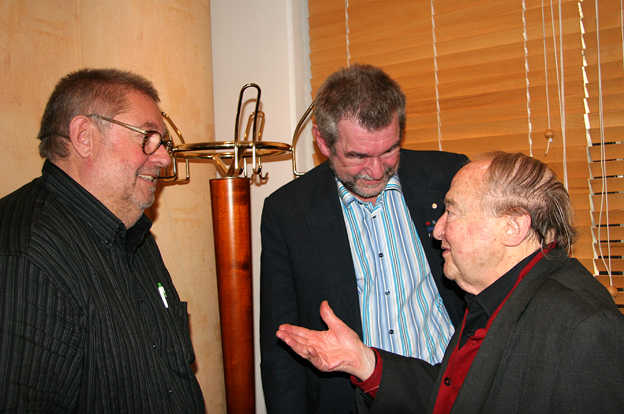 Any prognosis for the future?
No. I just can hope that we will continue to have the money for our productions. As long as we can survive, it’s ok. I mean, the money is not my first concern. The music is the most important thing.

BIS is ICMA’ label of the year. What does this mean to you?
It’s a great honour. The Jury obviously has understood what we do and what our aims are. This inspires and encourages me to soldier on

Do you have any really important souvenirs from your life as a label owner?
Oh, difficult question! Which one of your children do you prefer? I will tell you this story from the recording sessions of the Sibelius Violin Concerto in the original version. The Sibelius family had allowed this recording on condition that we had to hire a Finnish soloist. We started the recording, but had to abort it since the violinist failed to play it. Finally, the family allowed that we engaged Leonidas Kavakos as soloist. The first movement went very well, yet in the second movement he did not entirely respect the written text. I stopped the recording and heard him saying that Sibelius’ original text could not be played and he had to invent an alternative of his own. I said: No, you have been hired to play the original version, so you must do it. He answered: Impossible! There was a big tension between us. I said: Ok, then I know somebody who will be happy. He asked: Who? I said: The first violinist we had and who was also not able to play it. That was tough. He said: Give me a break. We took a break and afterwards he came and said: Let’s try it. We restarted and he played the passage flawlessly. Amazing! That’s one of my best souvenirs 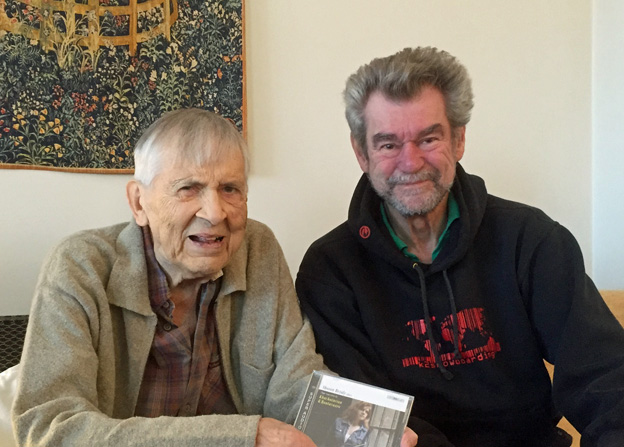 Presenting the recording by Sharon Bezaly of Rautavaara’s Flute Concerto, some weeks prior to Rautavaara’s death

Could you name one recording you are especially proud of?
Yes, our catalogue number 1499, Nordic Spell, with three flute concertos played by Sharon Bezaly. The three were commissioned by me.  We were lucky enough to get three marvellous concertos. Especially the Concerto by Kalevi Aho is an absolutely amazing work. Sharon played it all over the world with great success. So this disc is really special to me!