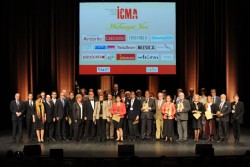 The ICMA Awards Gala 2012 at La Cité in Nantes (France), hosted by Orchestre National des Pays de la Loire and its Music Director John Axelrod has been called ‘a big success’ by the numerous participants, winners, label representatives, agents and the audience.

That great event of the 15th of May underlined the seriousness and the high level of this Award. After the Award Ceremony a Gala Concert took place and enthused an audience of 1500 in La Cité’s Grand Auditorium. A number of ICMA winners 2012 took part: Krzysztof Penderecki, Jean-Efflam Bavouzet, Joseph Moog, Krassimira Stoyanova, Véronique Gens, Trio Flamel, Wolfram Brandl and Rachel Kolly d’Alba.

During its General Assembly in Nantes, the Jury welcomed as a new member the Russian weekly Kultura and prepared the Awards of 2013.

The Ceremony and Gala Concert will be hosted by the Orchestra La Verdi (www.laverdi.org) conducted by John Axelrod. The names of the winners will be published in January 2013.