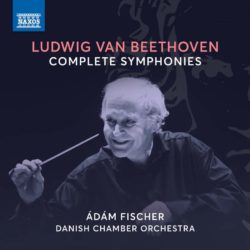 Normally, at the Award Ceremony which was scheduled to be held in Seville today, 30 April, the Jury of the International Classical Music Awards would have announced the winner of the Recording of the Year Award, which is chosen among the winners of the various audio and video categories. Well, the Award Ceremony and the Gala Concert having been cancelled, the announcement is just made via the Internet.

The award goes to the winner of the Symphonic Music category: