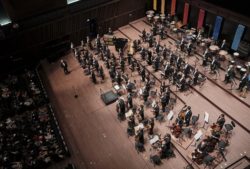 Over a quarter of a million people have seen the live recording of the ICMA Gala Concert at the Philharmonie in Luxembourg, with winners of the International Classical Music Awards 2022 and the Luxembourg Philharmonic conducted by Adam Fischer. Among the many comments from all over the world in Deutsche Welle’s YouTube channel, a majority says that this was « a wonderful » or « an amazing concert!!! »

ICMA President Remy Franck says: « For ICMA this success is overwhelming. Reading comments from Indonesia, Colombia, Argentina, Ethiopia, Canada, the United States, and from many other countries is absolutely terrific. Our thanks go to the Deutsche Welle and the Philharmonie Luxembourg who made this possible. »

Some viewers were truly newcomers to classical music, as was this person from Ethiopia: « Wow it was amazing music (…) I’m so happy and proud, I’ll see music live ❤ and it was my first time in my life on this concert. Thank you for this wonderful concert. » Or this one: « Thanks for such a wonderful performance. I had a project where I had to view a concert live or a concert that you go to, and this one was the perfect one. I had to identify the music in the concert and do a concert report of 3 songs, 3 pages total on the songs and what rhythm they had, etc., for my history of music project. I couldn’t have done it without you guys! The music playing was exceptional. I loved this performance very well! »

Some viewers focused on some of the performers: « This kid Julian Kainrath on violin blew my mind! What a talent! » – « I really like this Jakub Hrusa conductor! Very energetic! Love the music! Bravo! Did he stomp his feet before they started playing? Cool! I have friends that say classical music is too calm…nothing calm or boring about this piece! »

A person from Canada wrote: « I was impressed by the sound quality of the Luxembourg Philharmonic Orchestra. The young violinist Julian Kainrath moved me strongly, he has a great future ahead of him…BRAVO for this gala concert !!! »