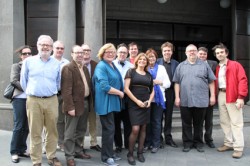 The Jury members with the manager of the Canary Island Festival, Donna Candelaria Rodriguez

End of January, the ICMA Jury met in Las Palmas, attending the Festival of the Canary Islands and having its General Assembly at the Teatro Guiniguada. Main topics on the Agenda were the preparation of the next Award Ceremony in Milan (March 2013) with the Orchestra LaVerdi conducted by John Axelrod as well as the Rules and Regulations for the 2014 Awards. The Awards 2013 will be published on the 1st of February.

In Las Palmas, a number of decisions also were taken to allow the preparation of the Award Ceremony 2014 which will be held in Warsaw. The Award Ceremony and Gala Concert on the 12th of April will be part of the renowned Beethoven Easter Festival in the Polish capital city.