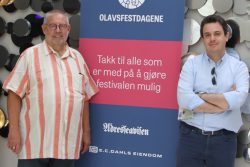 Olsok (Olav’s Vigil) is a national day of celebration in Norway, remembering King Olav II Haraldsson of Norway, the so-called Rex perpetuus Norvegiae, the Eternal King of Norway. July 29 is traditionally the date of the death of King Olav at the Battle of Stiklestad, east of Trondheim in 1030, when he tried to Christianize Norway.

Every year around Olsok, Trondheim is filled with festivity and street life, concerts, lectures, and numerous other events.

The opening concert on 28 July featured the new composition Pilgrim, with music from Alasdair Nicolson on a text by Jan Fosse, with Trondheim Solistene and the BBC Singers.

In another festival highlight, the Japanese maestro Masaaki Suzuki conducted The Norwegian Baroque Orchestra and the choristers of the Hungarian Purcell Choir in works by Telemann and Bach.