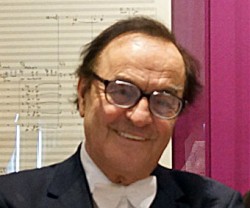 Swiss conductor and ICMA Lifetime Achievement Award winner Charles Dutoit will lead the Boston Symphony Orchestra on its upcoming tour to Japan and China, May 1-10, stepping in for Lorin Maazel who has to interrupt his activities until the third week of May due to an accident.

Maestro Dutoit will make no changes to the originally scheduled tour programs. Still in Warsaw, where he received the ICMA Award last Saturday, he was collecting the scores for the tour. Those programs will feature violinist Janine Jansen performing Tchaikovsky’s Violin Concerto in Tokyo on May 8 and 9 and  pianist Behzod Abduraimov performing Rachmaninov’s Rhapsody on a Theme of Paganini in Beijing on May 1, Shanghai on May 4, and Guangzhou on May 6.  Tour repertoire will also include symphonies of Mahler (No. 5), Tchaikovsky (No. 5), and Mozart (No. 38, Prague), and a BSO signature work, Berlioz’s Symphonie fantastique, as well as Mussorgsky’s Night on Bald Mountain and Glinka’s Overture to Russlan and Ludmila.

The BSO’s long-awaited return to China will include performances in Beijing’s National Centre for the Performing Arts (5/1&2), the Shanghai Oriental Art Center, (5/4), and the Guangzhou Opera House (5/6), marking the BSO’s first performances in China since its historic 1979 tour there as the first U.S. orchestra to visit China after the establishment of diplomatic relations. The Boston Symphony Orchestra will follow these performances with three concerts in Tokyo-the first BSO concerts in Japan since the orchestra’s last tour there with Seiji Ozawa in 1999-with performances in the Tokyo Metropolitan Theatre (5/8) and Suntory Hall (5/9 & 10).