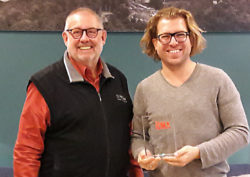 Tenor Julian Prégardien was given his trophy for the award he won in the 2017 ICMA, Vocal recital category. Prégardien had to cancel the Award Ceremony in Leipzig, April 1st, due to illness. While being in Luxembourg for a rehearsal, he received the trophy from ICMA President Remy Franck, today at the Grand Theatre. He won the award for his CD Schubertiade with Philippe Pierlot, Marc Hantaï and Xavier Diaz-Latorre, released by Myrios.