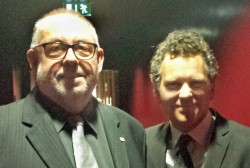 The Luzerner Sinfonieorchester will host the ICMA Award Ceremony and Gala Concert 2019 at Lucerne’s famous concert hall KKL. The event will reunite the prominent award winners and representatives from the international musical industry at one of the most prestigious cultural places in Europe.

Intendant Numa Bischof Ullmann says: “The Luzerner Sinfonieorchester is proud to host the ICMA Award for the first time in Switzerland. The promotion of artists – both for young and established personalities – is a high priority for us. ICMA and the Luzerner Sinfonieorchester share congenial values in this regard and thanks to the ICMA Award we will be able to step up our efforts further.”

ICMA President Remy Franck says: « We are happy and proud to have one of the best Swiss orchestras as partner for our event, the Luzerner Sinfonieorchester. We particularly like the creative spirit we encountered in Lucerne, where, according to a suggestion from the orchestra, we will introduce a new Award, the Orchestra’s Choice, that will honour an artist selected by the musicians and their Music director. »

Founded in 1806, the Luzerner Sinfonieorchester is the orchestra-in-residence of the KKL Luzern and the Opera Orchestra of the Lucerne Theater. It has gained an international reputation in tours to South America, Japan, China and Europe, and through its many recordings, as well as through its commission of significant new works and the promotion of young talent. Beginning with the 2011/2012 season, James Gaffigan has been the chief conductor of the orchestra.