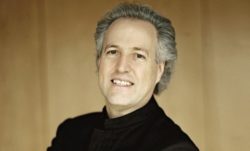 Austrian conductor Manfred Honeck, Music Director of the Pittsburgh Symphony Orchestra since 2008, is ICMA Artist of the Year. Musica’s Nicola Cattò met the former Vienna Philharmonic viola player (his brother Rainer is still Concertmaster) in Milan at the beginning of January, after the first of three concerts devoted to a traditional Vienna New Year repertoire that got a thunderstorm of applause in the iconic Milanese theatre.

You came back to La Scala after a 20 years gap (not counting the very recent concerts with the Academy Orchestra). A programme very much connected to your musical culture, but not at all to Italian tradition, marked this comeback. How did it work?
Actually quite well, because these musicians are technically very good. Moreover, for this music you need to be a musician with taste, with good technique and a feeling for rhythm. You need a lot of rubato, many stylistic elements that la Scala orchestra is able to give. You certainly know that I have jumped in for Zubin Mehta, who had already programmed a Viennese concert. I slightly changed some pieces, but the concept was already there. 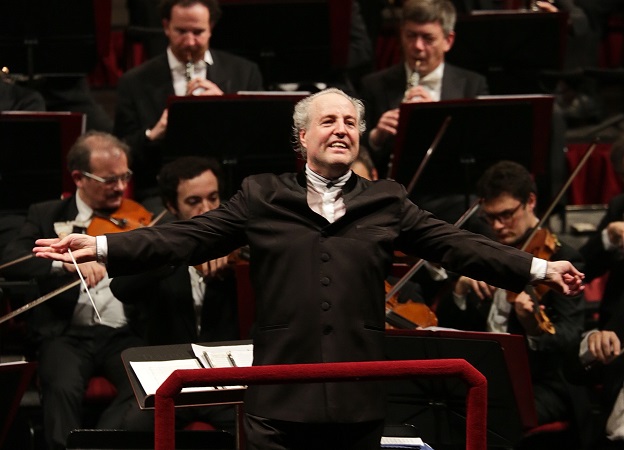 Manfred Honeck at La Scala in 2018

You conducted a similar programme with Santa Cecilia Orchestra four years ago: Santa Cecilia and La Scala are both Italian orchestras, but the first is a symphonic one, while the latter mainly an operatic one…
But both consist of fantastic musicians, so you can obtain the same results you have in mind. Of course, I knew better Santa Cecilia, because I had conducted there some ‘serious’ programmes, heavier music. But – believe it or not – also in that case I had jumped in for a colleague, Georges Prêtre, who had cancelled this New Year’s concert. People think that this kind of music is easy, and actually is easy to listen to it, like Mozart; but, as for Mozart (even if in a different way), musicians know how tricky is to play it well. If you do too much, it’s dangerous, if you do nothing, it’s awful. You must find the right thing, the right time, and I think that both these Italian orchestras found the right point.

But tell me: is it possible to learn the way to play this Viennese music, or you must be born with it?
Let’s say this: if I’d been born in Italy, with Verdi and Puccini, I’d be more familiar with them. There are stylistic elements, also in Belcanto that you must learn and know, and that is possible. In Vienna it’s the same: if you are born with this style and you understand it, that’s wonderful. But you can learn it because we are humans. Love and laugh are common parameters.

Tradition as a positive thing, but also a risk?
Both, exactly. I like tradition very much, as it’s part of our history, and we artists are obliged not to forget it. How can I ignore the way of playing, the style of our great composers? But then there is a danger, if you feel too comfortable with it, if you don’t think about it anymore. I like quoting Gustav Mahler, who said that “tradition is the conservation of fire, not adoration of the ashes”. What I try in my whole conducting career is to rethink new pieces. I’ve just come back from Berlin, where I conducted the Deutsche Symphonie-Orchester in the Beethoven’s Seventh, a great piece known by everyone. So I went back to the roots. Why should I do it? Which reasons? Which metronomes? Which was Beethoven’s concept? Let’s take the beginning of second movement, for example: is it a funeral march? Because traditionally it is played as an Adagio. But it is not an Adagio, neither an Andante. It is an Allegretto: a remarkable difference! To me, it is a pilgrim song, a procession, like to one from Vienna to Mariazell, starting pianissimo to the final fortissimo. Therefore I asked to play it in a more singing way, like you would say “Sancta Maria, ora pro nobis”. See: it fits perfectly! Beethoven wrote ‘tenuto’, ‘legato’ as you’d be walking, and singing. This is an example, but you must always question if what you do is right: a never-ending search for new. 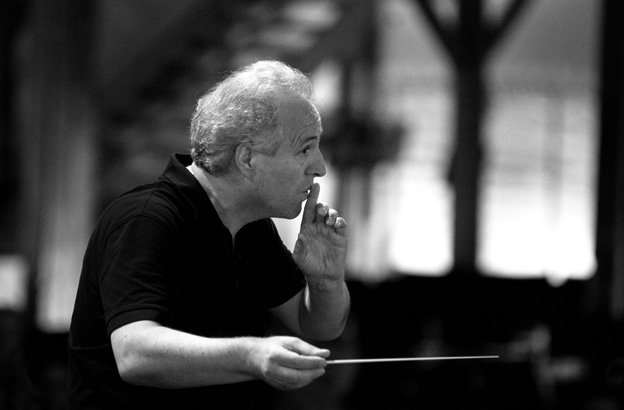 The Strauss repertoire is often played in a very polished, over-detailed way. On the contrary, you chose to underline its Austrian, folkish side…
Strauss, but also Haydn, Mozart, took the music people were singing in the streets and elevated it to art form. The folkloristic element in Strauss is deep, we can see what Austria was at that time. Speaking again of Beethoven’s Seventh, in the third movement, there is a Trio which turns into a very rustic dance, as Haydn and Mozart had done in many occasions…

…and Mahler did the same
Mahler is a perfect example: he often used folk music. In my interpretations, I tend to work out these idiomatic elements. But Mahler wouldn’t be Mahler without Johann Strauss!

And Johann Strauss was admired by very serious musicians like Brahms, Richard Strauss, Verdi: this must makes us think!
Absolutely: the so-called ‘light music’ is perhaps the most difficult to get!

During your former career as a member of the Vienna Philharmonic, you took part to some New Year’s Concerts: are there some conductors who impressed you more deeply in this specific repertoire?
I had a lot of really wonderful impressions: Riccardo Muti made a wonderful concert, he had — and still has — a wonderful relationship to the orchestra, he understands the Viennese style very much. Unfortunately, during my 8 years in the orchestra (I left in 1991), I did not play the New Year’s concert under Carlos Kleiber, but I played under him for my first tour with the Vienna Philharmonic to Mexico: I liked his style very much, his style of conducting but also his way of thinking, knowing every nuance of the score. He did not ‘execute’ music, he felt it. I have also played under Mehta, Abbado, Maazel, everyone differently, but I have learnt from all of them.

Strange enough, you never conducted the Vienna New Year’s concert…
I’m happy to conduct everywhere but, obviously, Vienna has a special place in my heart.  Many people keep asking me about this: I can die also without that!

You openly speak about the importance of faith in your life; is it also a way to understand music?
I can only speak for myself, and for me it’s important. The influence of what I get through the faith is strong in music thinking, because music thinking has to do with understanding the man himself, why we are here now in this world. For example, you can’t understand Mahler without having a feeling for eternity, for God: how, otherwise, can you play ‘Resurrection’ or ‘Wunderhorn’, or the Ninth Symphony? He was not practising, but there are, in his music, signs of a harmony, which I believe are divine. Sometimes music is extremely earthly (it’s composed by humans!), but sometimes there is something so special that makes me think there must be the fingerprint of God. Don’t misunderstand: also if a composer, like Richard Strauss, was not religious, his music can be also fantastic and I like conducting it. Birth, life, death are the principal steps of human life, and every human must face this questions, in very different ways.

You find the sense of life, of religion, not only in sacred repertoire, then!
Everywhere, even in a Strauss waltz, maybe: happiness is also part of the secret of life. 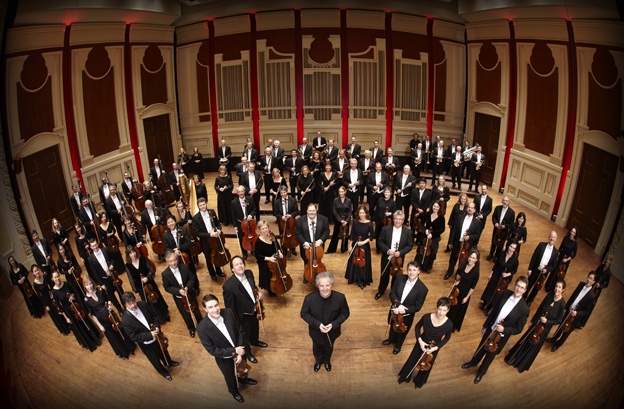 We spoke about tradition. You’ve been Music Director of the Pittsburgh Symphony Orchestra for many years (since 2008). Their tradition is very different from the European one. Which kind of orchestra did you find when you arrived there?
Yes, we have different traditions in Europe and America. But what is Europe, and what is America? The London Symphony plays differently from the Vienna Philharmonic, La Scala from St Petersburg, Berlin from Czech Philharmonic, and the same happens in America, where Pittsburgh is very different from New York, or Los Angeles and Chicago. Different orchestras derive from different humans and different music directors, who play a big role in the USA, because normally they stay a long time with their orchestras and leave a stamp on the sound and on the way of playing.
There is no secret that most of US orchestras play extremely precise and brilliant, sometimes because they play for much bigger halls then in Europe, up to 4000 people! You must be louder! In some schools, the strings are trained to produce a big sound, because they must be heard also in the last row. And that’s what I experienced in Pittsburgh at the beginning. But the reason why they have elected me as music director is also because of the tradition: Steinberg, Previn, Maazel, Jansons. They want to understand more deeply the colours of music. And I brought them these different feelings. Music does not consist of only one colour! This can depend on the speed of the bow, on the use of vibrato (quick, big, accelerando: not only with or without!): you can work on a lot of details. And I would like to go on working on Haydn, Mozart. In this repertoire you can really train an orchestra, it’s like drinking a glass of pure water, where you can see every stain. You cannot hide anything.

The consequence of this commitment to Pittsburgh is also that opera is a minor part of your career…
Unfortunately, yes, it’s a pity, but it was my decision. My last opera was Dialogues des Carmélites by Poulenc, in Stuttgart, and I have some plans for the future, because I love opera very much.

Do you like the conductor’s life in its entirety? Does it have any downside?
It is an enormous joy to make music and to have the freedom to choose – when you are established at a certain level – to do what you want, when you want. The negative side is that you are travelling a lot, not being at home as long as you’d like to. I’m a family man, and the older I get, the more I want to stay with my family.

I would like to amicably provoke you as a former Vienna Philharmonic member. Is it true that this orchestra pretends to follow the conductor but, actually, follows only very few of them?
It is actually not true, it’s one of the fairy tales of the music world. No orchestra in the world can go alone in certain passages. An orchestra needs guidance. When, at the beginning of Soviet era, they tried to establish an orchestra without conductor, it failed. You do not need the beat, but an artistic guidance. When I played in the orchestra, I hated conductors who came and let the piece play through (“You know it, I know it”). The musicians want to be challenged. To fight for a piece, fight for an interpretation is what I believe is necessary in our days, when the level of orchestras is everywhere much higher than 20-30 years ago. I cannot stand bad routine, it’s a danger.