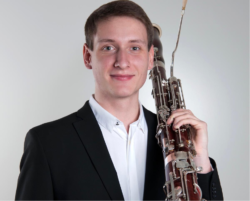 Croatian bassoonist Matko Smolcic is the Young Artist of the Year 2019 of the International Classical Music Awards (ICMA). He received his first lessons from Mykhaylo Kraynyk at the Franjo Kuhac music school in Osijek. Since 2014, he has been studying at the Academy of Music in Zagreb with Zarko Perisic. From 2017 to 2018 he studied with Richard Galler at the University of Music and Performing Arts in Vienna.
Aside from his regular education, he has also received musical stimuli from attending masterclasses with renowned bassoonists, such as Sergio Azzolini and Bence Boganyi. During his high-school years, he got his first major orchestral experiences. Matko Smolcic performs regularly as a soloist, chamber musician and orchestral musician. Since his repertoire stretches from Baroque to Contemporary music, he performs at a vast number of events and festivals both in his native Croatia and throughout Europe (Slovenia, England, Austria, Switzerland, Wales etc.).
ICMA Jury member Sanda Vojkovic made this interview with Matko in April 2019, after his graduation exam at the Zagreb Music Academy

First, I must congratulate you on your excellent graduation exam. You’re only twenty-three years old and already have a diploma of the Academy of Music, and moreover for an instrument that that is not the focus of public interest. How did you decide to play the bassoon?
I started playing rather late, in 2006, at the age of eleven, in the Franje Kuhac music school in Osijek. Initially I wanted to play the saxophone. However, since there were no free spots in that section, I was encouraged to pick a different instrument. One of the professors asked me if I’d like to play the bassoon. I didn’t know what kind of instrument that was, so I googled it and decided to play the bassoon. And so, we became best friends for eleven years now.

How do you feel when you play the bassoon, and how hard is it to play?
It’s a truly unique instrument, with a distinctive character. It can be very lyrical, but also very virtuoso and glamorous. Of course, it’s completely different to play works from the 20th and 21st century, some of which are very complicated to perform, from works written at the time the instrument was invented. 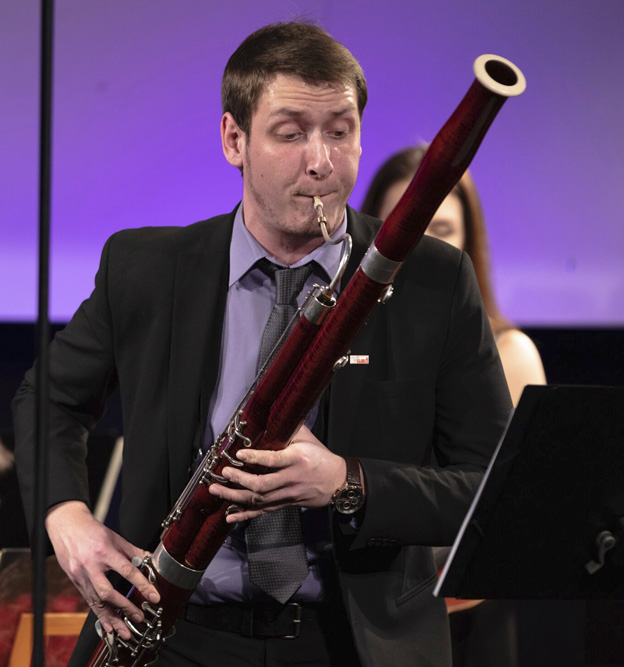 In your biography we read that you participated in a number of competitions. What do those competitions mean to you and how did they help you in your career?
My first bigger competition was the Croatian Young Musician’s competition under the patronage of the Croatian Society for Music and Dance Education in 2008, when I was the absolute winner in my category, and I was especially happy about the prize won in the category of chamber ensembles in 2012, because I’m especially attracted to chamber music. I also won awards in international competitions, in the solo category and for chamber ensembles. Every competition is a great challenge for a young musician, not just technically but also physically and mentally. But I believe it’s an unavoidable part of the learning process and the preparation for a professional career.

How do you prepare for performances and competitions?
From my first year at University I played in various ensembles and orchestras, so I had to continuously organize my time around the preparation of different programs, performances with different ensembles and student duties at the Academy. It all resulted, unfortunately, in never developing a stable rhythm of preparation for concerts. But I hope that now, having graduated and gotten rid of a big obligation, it will become a bit easier to organize myself. For now I’m trying to ensure that at least on the day of the concert I am calm enough to be able to mentally prepare myself for the performance.

What kind of repertoire attracts you most? In your graduation concert you played a baroque Sonata by Johann Friedrich Fasch, as well as works of the first half of the 20th century, by Dutilleux and Poulenc as well as the work of Croatian composer Branko Okmaca, Metamorphosis, from 2007. Listening to that, I had the impression that performing modern music is a special challenge to you?
Performing modern music is definitely a big challenge and I greatly enjoy it, but it seems that my first love is baroque music after all. I’ve wanted to become part of a circle of musicians who perform and study the historical ways of performing baroque music, on authentic instruments, and I would love to deepen such an approach more systematically. I’ll probably soon pick a more specialized study of baroque music.

You are the Young Artist of the Year at the International Classic Music Awards, the only international award for classical music. It’s the first time a Croatian artist won this award. How did you feel when you were told about the award?
I was very surprised when I was told that I won the Young Artist Award. I almost couldn’t believe it. It’s a huge honour and certainly a big step in my career. I’m most happy about getting the opportunity to perform in the Gala concert in Lucerne with the Lucerne Symphony Orchestra under the baton of conductor Lawrence Foster. It’s an indescribable honour to share the stage with musicians such as the legendary pianist Nelson Freire, violist Tabea Zimmermann, violinist Stephen Waarts and Chouchane Siranossian who are also award winners. I’m extremely excited and can barely wait for it. I will be playing two movements from the Bassoon Concerto op. 75 by Carl Maria von Weber.

What is your next big event?
Well, in August I am Artist in Residence at the Olive Classic European Music Festival on the island of Pag in Croatia. That will be a marvellous experience, I am sure.