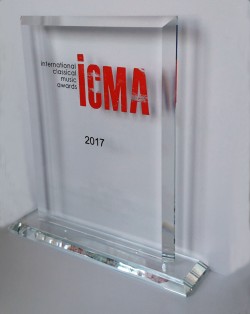 Yesterday, with ICMA President Remy Franck attending, the new trophy of the International Classical Music Awards was revealed in Paris. Unlike the old one, which served for the six first years of the most important international music award in the world, the new one has a more modernistic approach.

The new trophy, made of glass, is characterized by a simplicity but a distinction of form, and a consistent high quality in design and build. The trophy emphasizes on the visual identity of the ICMA brand. The result is a trophy that delivers impact from a distance, detail and insight up close.

The new trophy will be used for the next Award Ceremony, which is scheduled to take place on 1 April at Leipzig’s Gewandhaus. A total number of 28 trophies will be given that evening to the winners coming from various countries.