A film about Polish composer Krzysztof Penderecki has been presented in Leipzig. On the occasion of Penderecki’s 80th birthday, this film portraits the artist with a comprehensive ‘work in progress’ documentary: despite his growing age, Penderecki, ICMA Lifetime Achievement Award winner in 2011,  is still an unflinching and active composer and conductor. For one year, the author Anna Schmidt has been studying this world-famous artist, speaking also with high-carat companions: Anne-Sophie Mutter, Julian Rachlin and Janine Jansen, Mariss Jansons and Lorin Maazel; Johnny Greenwood (Radiohead) and Andrzej Wajda. 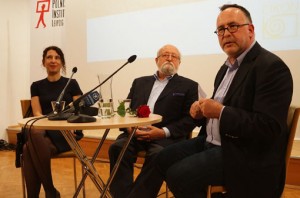 Martin Hoffmeister, Head of Music Department at MDR and ICMA Jury Member (r.), presented the film in Leipzig. At his left we see composer Penderecki and film director Anna Schmidt.

The film follows Penderecki from Kraków to Munich, from Vienna to Leipzig, and on various occasions to his country estate in Luslawice. And throughout, the composer reflects on the meteoric beginning to his career, unexpected turning points in his life and ingenious ideas. Thoughts, dialogues, extracts from his music and film scores, encounters and the natural world all condense to create a fascinating, multi-layered portrait including also very rare archive material. 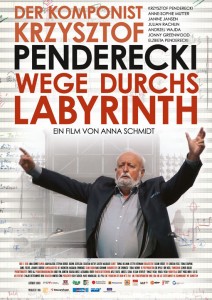