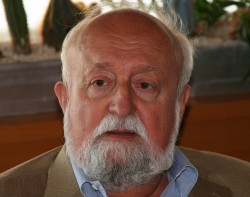 The City Council of Krakow, Poland, has unanimously voted in favour of granting Honorary citizenship to the composer Krzysztof Penderecki, winner of ICMA’s Lifetime Achievement Award in 2012. A special ceremony is to be held after the summer holidays, before the composer’s 80th birthday in November. The City Council described Penderecki as one of the symbols of Krakow’s cultural life, recalling his support for the foundation of the chamber orchestra ‘Sinfonietta Cracovia’ as well as his contribution to the success of the European Capital of Culture festival in Krakow in 2000. Penderecki has lived for a long time in Krakow. Past recipients of Krakow’s honorary citizenship include Ronald Reagan, Margaret Thatcher, Zbigniew Brzezinski, Lech Walesa, Czeslaw Milosz and Wisława Szymborska.