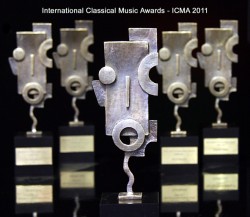 Lifetime Achievement Award winner Menahem Pressler played Mozart, Artist of the Year Esa Pekka Salonen conducted his work ‘Helix’, Young Artist of the Year David Kadouch was heard in Mendelssohn’s Second Piano Concerto. One of the driving forces behind the BIS Sibelius Edition, Folke Gräsbeck, played, together with the strings of the Tampere Philharmonic, Sibelius’ Piano Quintet in a newly realized transcription by the Tampere Philharmonic’s composer in residence, Jouni Kaipainen.

This outstanding event, scheduled at Tampere Hall the 6th of April at 8 p.m., was broadcast live by the Finnish Radio, and is to be heard in the program of Germany’s MDR Figaro, Saarländischer Rundfunk, Luxembourg’s Radio 100,7, the Russian Orpheus Radio and many other partners of the European Broadcast Union’s worldwide network.

During the Award Ceremony in Tampere, ICMA President Remy Franck announced that the next ICMA Award Ceremony and Gala Concert will take place in Nantes, France, on the 15th of May 2012, with the Orchestre National des Pays de la Loire conducted by John Axelrod.