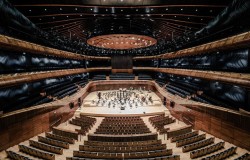 The NOSPR Concert Hall in Katowice

ICMA (International Classical Music Awards) announces that the Award Ceremony and the Gala Concert 2018 will take place in Katowice, Poland. ICMA President Remy Franck says: « We are happy and proud to have one of the best Polish orchestras as partner for our event, the Polish National Radio Symphony Orchestra in Katowice. We know this orchestra very well, since our Jury already awarded it several prizes in the past ».

Narodowa Orkiestra Symfoniczna Polskiego Radia z siedzibą w Katowicach (NOSPR), was founded in 1935 in Warsaw and led by Grzegorz Fitelberg until the outbreak of World War II. In March 1945, Witold Rowicki revived the orchestra in Katowice. In 1947, upon his return from the United States, Grzegorz Fitelberg took over the post of the Artistic Director. After his death in 1953, the orchestra was directed by such conductors as Jan Krenz, Kazimierz Kord, Jerzy Maksymiuk, Jacek Kaspszyk, Antoni Wit and Gabriel Chmura. At the beginning of the season 2012/13, Alexander Liebreich became the Artistic Director and Chief Conductor of the NOSPR. In September 2000, Joanna Wnuk-Nazarowa was appointed the General and Programme Director.

The Award Ceremony will take place on 6 April 2018 in the orchestra’s new concert hall, opened on 1 October 2014. With a capacity of almost 1,800, this world class concert hall’s acoustics meets the highest standards applied by world-renowned acoustic consulting firm, Nagata Acoustics.

ICMA’s Award Ceremony 2016 will be organized in collaboration with the Basque National Orchestra (Euskadi Orchestra) on 1 April 2016 in San Sebastian, as part of the European Capital of Culture program.

In 2017, also on 1 April, the Ceremony and the Gala concert will take place in Leipzig, in collaboration with the Gewandhaus Orchestra.