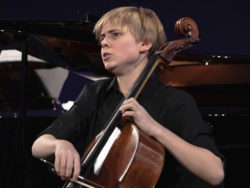 Sixteen-year-old German cellist Philipp Schupelius is the winner of the Discovery Award of the International Classical Music Awards 2020. The musician, who grew up in Berlin, is currently studying with Wolfgang-Emmanuel Schmidt at the Julius Stern Institute of the Berlin University of the Arts, one of the largest and most renowned institutions for the promotion of young musicians in Germany. At the occasion of concerts at the VP Bank Classic Festival in Bad Ragaz (Switzerland), Isabel Roth, Martin Hoffmeister and Remy Franck made the following interview with Philipp Schupelius.

Philipp, what does it mean for you as a young musician to have won the Discovery Award of the ICMA?
It is a very great honour! I am happy because the award is so important and helpful for young musicians and because I know about the career of previous award winners. And I am especially looking forward to the gala in Seville, where I will play two movements from one of my favourite concertos, the Elgar Concerto, with the Seville Orchestra under John Axelrod.

Philipp, your father says that he and your mother never forced you to play the cello or to make music in general. You supposedly got yourself into it and give the impression that you really like being on stage. Is music such an important area of communication for you?
Oh, yes. In the past I didn’t see music as communication, but simply as something I like and enjoy. I never had and never have a cello lesson that was full of drill and scales, but really always full of music. Communication then essentially took place between me and the cello. And that still plays a role today. But in the meantime, of course, one thing has come to another, communication with other musicians, with the audience. But I can’t really say how that works. I simply do it very, very gladly. Playing the cello is the most important thing in my life.

Why did you choose the cello?
I started playing the cello when I was eight years old. I have four brothers and sisters, and they all make music in some form or another. Then in a concert I saw Ulrich Voss conducting – and I wanted to do that. Ulrich Voss taught me a bit of conducting, more for fun. Actually he is a cellist. And so the cello came into play and soon took the leading role. I would still like to learn to conduct at some point, in the best case I would really like to conduct. But in reality, I can no longer imagine to live without playing the cello. 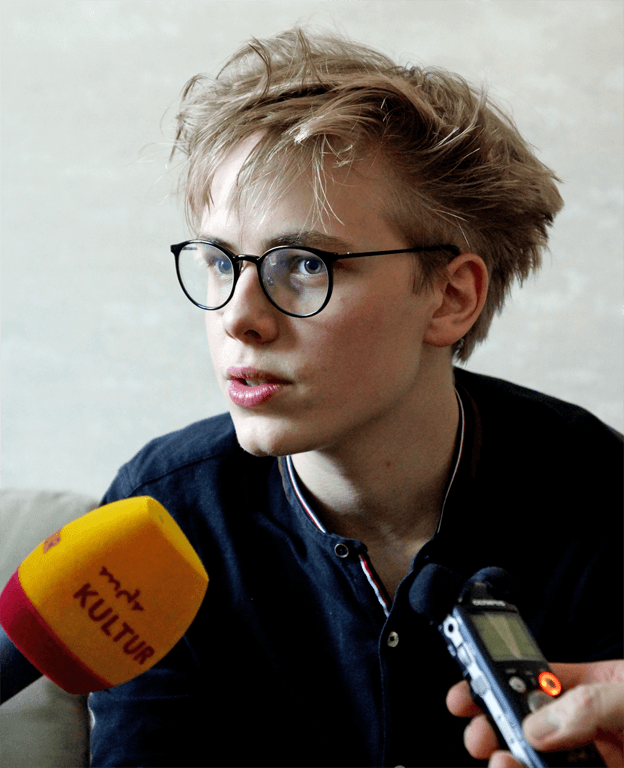 What exactly fascinates you about this instrument?
The cello is often said to be the closest thing to the human voice. This is due to the variety of sounds and the range of the tone, from the bass to the violin registers. You can simply elicit a great many colours from this instrument. With a cello you are very closely connected.

And what do you particularly like about the Cello Concerto by Edward Elgar?
Elgar wrote this concerto in 1917, during the First World War. At that time, his wife was seriously ill. And then he found this melody, but he did not yet know who the narrator should be. Fortunately, he chose the cello. I think it’s just the right instrument to tell this story. The cello lives this story – in all its facets. The basic mood is melancholic, but there are also very happy moments of retrospection, exuberant and then again desperate. The variety of moods is incredible.

It’s a technically very challenging piece…
It’s one of those few concertos where you have to be fully in the music with the first note. Only the Saint-Saëns Concerto is comparable in this respect. The first chords have to draw you into the music. But that also has the advantage that you are immediately in the right mood.

Do you have references for this concerto?
The Jacqueline DuPré recording is outstanding because it has an incredible intensity and keeps the tension from the first to the last note. I also like the recording of Yo-Yo Ma very much.

You will have to expand your repertoire now. Is it a great challenge to learn new pieces again and again?
Above all, it’s incredibly fun! Being able to play many pieces and learn new ones is exciting and always a new adventure. I like it when I have a lot to do on the cello, I like to be challenged by my instrument. Of course, I have to take the time to work on the pieces in depth in order to do justice to the respective composer. That’s the crazy thing: that as a musician you get so closely and personally involved in the work of others.

The cello can be played solo, in concertos with orchestra or in chamber music. Do you have a preference?
These are the completely different facets of musical life, and I like all three. In chamber music, making music together is something very enriching. Everyone has a very important part, but you also have to be able to take yourself back, it’s not a solo performance. There is no such communication in the solo piece, it comes out most strongly in chamber music. As a soloist you can fully invest yourself. Both have their advantages, I would like to do everything.

Do you have a favourite composer?
Well, that changes and I always like the composer I am momentarily playing. But generally, yes, there are favourite composers. I love Beethoven because he is very humorous and shows a lot of wit in many pieces. Of course, I also love Bach, especially because of his variety of sounds. With him, every piece sounds completely different, it has its own very specific sound world. But the cello can very well embrace many composers. Every composer is different, but you have so many possibilities to present the characteristic timbres. That’s a challenge when you play several pieces from different periods and composers in one concert. You have to dig into each piece and focus on its specific sound world. 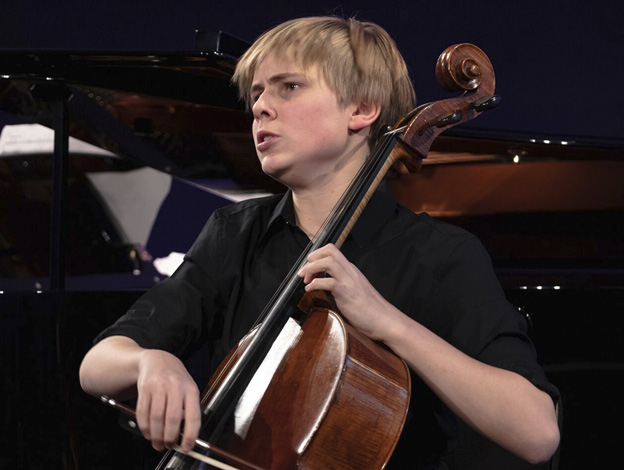 How does your training go?
I have been at the Bach-Gymnasium in Berlin for a few years now and was a junior student at the Hans Eisler Musikhochschule. The two are closely connected. And now I have been at the Stern-Institute of the Universität der Künste since two years.

And you have a close relationship with the Liechtenstein Music Academy. What does this institution mean for you?
Although there are also opportunities to perform in other institutions from time to time, that is mostly just auditions in class. In addition to the intensive study weeks, the Liechtenstein Music Academy also offers us many opportunities to play in real public concerts, and not only in Europe. For example, I was able to travel to Singapore with my trio, which was formed at the Music Academy. These are seminal experiences. You really don’t have that anywhere else.

What does a completely normal day of Philipp Schupelius look like?
I’m in the upper level now and there is the possibility at the Bach-Gymnasium to divide it up into three years. The result is that I have a little less school per day. I have a relatively long way to school by bus and subway. Depending on the connection I takes me sometimes almost an hour. I use this time to read or listen to music. Most of the time I finish school sometime between half past two and three o’clock and then I drive home and we always eat together in the family. My older brothers and sisters have already moved out, but they are still often there. My little brother is there anyway, he also plays the cello. And then I practice. My most important hobby is probably reading, but I also love to spend time with music beyond practicing, to listen to as much music as possible. I also have a weakness for cabaret and variety shows. For the Comedians in particular. And when I read, I also love to read about music and about composers. To occupy myself with the person of a composer always gives me a better insight into the music and helps me to better understand the music. When you understand the people behind a composition, you can better categorize the music.

What does your future look like?
I don’t know how exactly my path will look like. I only know that I will definitely take a path with the cello. 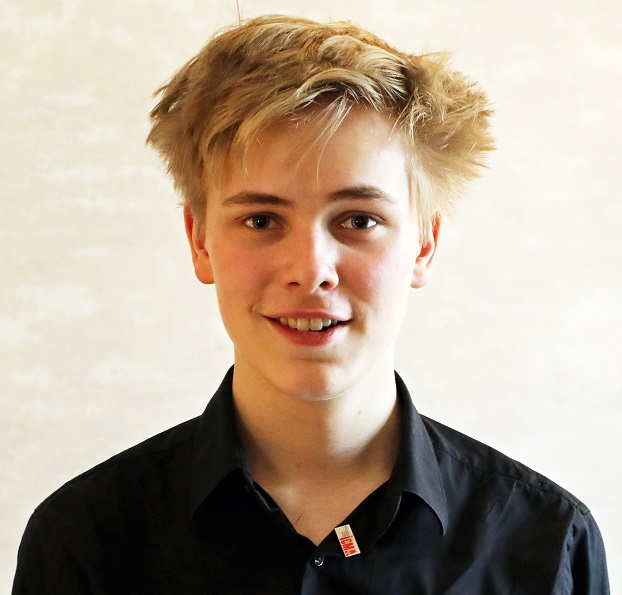 You read a lot about music, do you also listen a lot, and do you often go to concerts?
I listen at home a lot. I also go to concerts, and in Berlin I have many opportunities. I have the ClassicCard and so I can go to concerts for a reasonable price. It’s always an advantage if you know a piece of music when you start playing it. Of course, you mustn’t copy it, you should find your very own interpretations at the end.

You said earlier that the cello is a ‘singing’ instrument, do you also go to the opera?
Yes, I like opera a lot. Although I’m not the biggest opera fan in the family – my little brother is way ahead of me in this respect and knows more than I do, and my sister is a singer – but opera in its combination of acting and music always inspires me.

You have already played some competitions, will there be more to come?
I haven’t played many big competitions yet. I’m not quite sure which ones I will be aiming for. Competitions are useful because they give you a goal in mind, and because a lot of repertoire is required in competitions. Working towards that can be good for your own development.