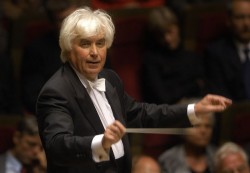 ICMA Lifetime Achievement Award winner Dimitrij Kitajenko turns 75 today. He was born on 18 March 1840 in St. Petersburg and studied at the Glinka School of Music and the Rimsky-Korsakov Conservatory, later also with Leo Ginzburg in Moscow and in the legendary conducting class of Hans Swarowsky and Karl Österreicher in Vienna.

He has made numerous recordings with orchestras including the Moscow Philharmonic, the Frankfurt RSO and the Bergen Philharmonic Orchestra. For decades he has collaborated with the Cologne Gürzenich Orchestra, and has been its honorary conductor since 2009. Their complete recording of Shostakovich’s symphonies has been awarded much sought after prizes. Their Prokofiev’s symphonies as well as their Tchaikovsky cycle are considered by various critics as benchmark recordings. This collaboration currently continues with works by Rachmaninov. Since 2012, Dmitri Kitajenko is principal guest conductor of the Berlin Konzerthaus Orchestra which he will conduct several times during the 2015/16 season, as well as the Gewandhausorchester Leipzig, several orchestras in Japan, the Helsinki Philharmonic, the Qatar Philharmonic, the Gürzenich-Orchester Köln and the Danish Radio Symphony Orchestra.