Julian Kainrath is the very talented violinist from South Tyrol (he was born in Merano) who won the Discovery Award in the ICMA 2022 edition: he is not even 17 years old! He will play on April 21st at the Philharmonie in Luxembourg with the Luxembourg Philharmonic Orchestra conducted by Adam Fischer (who will receive the Lifetime Achievement Award): his programme includes the virtuoso Introduction et Rondo capriccioso by Saint-Saëns. But on February 28th Julian played in Milan, with the pianist Luigi Carroccia, for the season of the Società dei Concerti: a concert that showcased the truly promising talent of this musician, whom Nicola Cattò (Musica, Italy) met for an interesting interview.

You were born in a borderland, among different languages (Italian, German and the Spanish of your Bolivian mother’s side) and cultures that are sometimes far apart. How did you live this fact? An enrichment or a difficulty?
It’s true, my mother is South American and I speak Spanish with her; my father is from Bolzano, on the border between Austria and Italy, and I speak German with him, while my parents use Italian with each other! For this reason, I am of the opinion that any approach to other cultures enriches artists, musicians. But not only that, it enriches every human being. Everyone should be interested in cultures that are distant from their own. I have experienced this diversity since I was a child, it has always been something natural for me.

In what way do you feel more Austrian or Central European, and in what way Italian?
This question about identity is complicated. I don’t feel I belong to a nation but to a continent, Europe, and this is even more so in such a difficult moment as the one we are experiencing. I feel represented by European values.

Both your parents are music professionals, so you grew up in this world. How did you choose the violin?
It was my mother who suggested it to me, because it was one of the most comfortable instruments to carry around! Seriously, I started when I was six years old, and step by step I became passionate about it. I overcame moments of doubt, which are natural and necessary, but when I was 13-14 years old, I realised that with the violin I could express what I have inside me, and that it would be my profession. 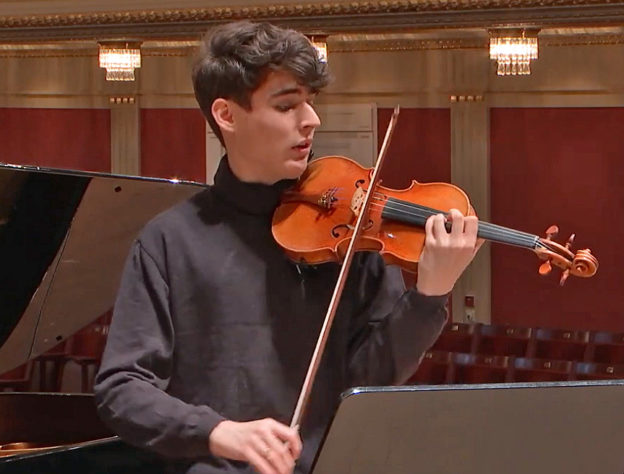 You studied with Dora Schwarzberg, a typical exponent of the Russian-Jewish school of the violin. What did she teach you?
I started working with her as a child, around the age of nine. From her I learned a real love of music, of playing, and the pleasure of listening. She used to organise home concerts in the evenings in her home, where I would meet artists, musicians, painters, intellectuals, talented young people: I was a child and enjoyed a unique privilege. Of course, she gave me a lot of technical and pedagogical experience, but above all she made me understand that music is a beautiful thing, not a constraint or an imposition.

For some time now, however, you have been working with a very different instrumentalist, Marc Bouchkov: what differences have you found?
I met him in Verbier in 2019, and before that I had heard him at the Tchaikovsky, where I was impressed by the sensitivity of his sound: then I fell in love with the person, loving and open to every new idea. On a violinistic level, it’s difficult to make comparisons with Schwarzberg. At the time I was a child, I had to form myself technically, while now I’m learning to exalt the purity of the sound, the sensitivity of the bow and the fingers. It’s really a physical matter, I would say. But I would like to add that since the age of 12 I have also been following Prof. Kuschnir at the University of Graz. The work I’ve done with him is something that only he could give me, because of the uniqueness of the approach. In short, everyone has a different way of working, but that’s what makes this job so beautiful: the variety, the creativity that one can have both in the studio and in concert.

You also sang for a few years in the Vienna State Opera Children’s Choir…
It’s true, I did it for almost four years. For a child it’s a heavy commitment, made up of study and long waits in the wings. I joined the choir because I liked singing, perhaps more than playing the violin. After all, when I was three or four years old, I listened to Rigoletto, Aida, I was crazy about those dramas! I had unforgettable experiences, but I had to give up when my voice changed.

Which violinists inspire you, among those of yesterday and today?
It may be trivial, but certainly Heifetz, Oistrakh, Kogan or, going even further back, Thibaud and Kreisler, of whom we have relatively few recordings, but who are a precious document on a stylistic level. There is no absolute truth in art and music: everything is subjective, even in technical matters, which depend on the physical structure of the individual musician. Among today’s colleagues, I obviously appreciate Marc Bouchkov, the young Canadian Kerson Leong, and Frank Peter Zimmermann, a fundamentalist in the field. 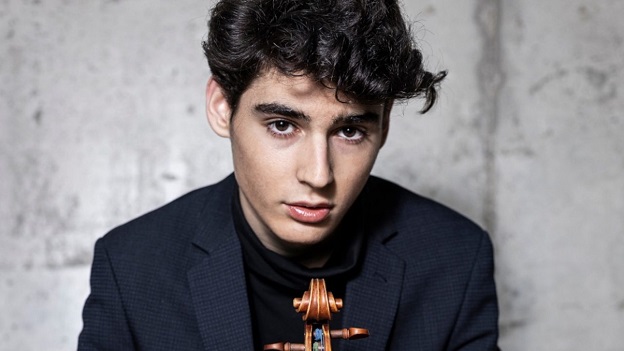 Your father, Peter Paul, is a long-time president of Busoni and now also of the World Federation of International Music Competitions (WFIMC), so I would like to ask you what you think of music competitions…
They are not indispensable for a career, especially nowadays. You can make a career even without winning one. But they are part of our world, and the important thing is to understand which ones are really useful and important: today they have multiplied to truly exaggerated numbers. The secret, in my opinion, is to consider it as a particular concert, maybe very tiring, but without playing differently from usual: if it works, you will be invited again, otherwise it is not a drama.

Has the violin taken anything away from you in life? Time, freedom, experiences?
I don’t think so. If it wasn’t the violin, there would have been something else to devote my time to. And I’m happy that way.

You won the ICMA Discovery Award over other musicians nominated by the Musikakademie Liechtenstein, of which you are a scholarship holder: what kind of experience is that?
The wonderful thing about that institution is the coexistence of students, young musicians and artists who share not only their studies but also their lives, their personal moments: something unique, which is difficult to find elsewhere. I am very grateful to that institution, because I have had rare opportunities.

And the next projects?
First of all, to finish high school, next year, and then a series of concerts with Louis Lortie. But it’s all very open, I like the idea of not knowing my future, of being surprised!