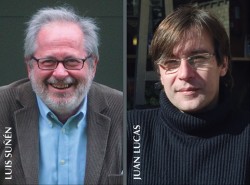 The Board of Directors of the Spanish magazine Scherzo, a member of the  ICMA Jury, has unanimously appointed Juan Lucas as editor of the magazine. He will be the successor of Luis Sunen who will retire in summer.

Juan Lucas (Valencia, *1962) is a journalist, music critic, filmmaker, photographer, record producer and creator of companies like Diverdi or La Quinta de Mahler and the magazine El arte de la fuga. As producer he has worked for labels such as Glossa, Verso, Symphonia, Col Legno, Neos, or of Anemos, a label he has created.

Luis Sunen (Madrid, *1951), writer and editor, has been at the helm of the magazine since 2003, when he succeeded Thomas Martin de Vidales. At the request of the Board, Luis Sunen will remain linked to the magazine. He has also participated in the appointment of Juan Lucas.

Luis Sunen was a member of the ICMA Jury yet at the time when it was called Cannes Classical Awards and later MIDEM Classical Awards. He was a pillar of this Jury, always providing essential support and input. A consistent, passionate, principled advocate for ICMA’s aims, he will be greatly missed by the entire Jury.

At the same time we welcome Juan Lucas, an expert with in-depth knowledge of the musical industry, and the Jury members look forward to working with him.