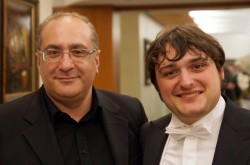 Martha Argerich has invited ICMA’s ‘Young Artist of the Year’ Alessandro Mazzamuto to perform during her annual Lugano Project. On 21 June Alessandro will play Clementi’s Sonata op. 40/2, Rachmaninov’s ‘5 Morceaux de fantaisie’ op. 3 and Liszt’s Paraphrases about Verdi’s Rigoletto at the Evangelic Church in Lugano. In a second concert, he will join Martha’s daughter for chamber music. Before those concerts however Mazzamuto will participate in a concert at Donetsk Philharmonic Hall in Ukraine, where from 20-26 May Accademia Pianistica Siciliana organizes master classes and concerts focusing Rachmaninov’s music. Both Alessandro and his teacher Epifanio Comis will perform during that Rachmaninov Festival in Donetsk. Comis also conducts the orchestra when Alessandro plays the Rachmaninov’s Second Piano Concerto.