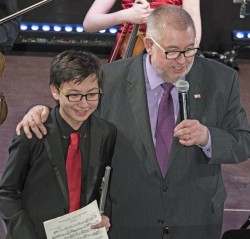 The 13 years old flutist Nikolai Song, winner of the first ICMA Discovery Award, was honoured by ICMA President Remy Franck at the Next Generation Festival in Bad Ragaz, Switzerland, where the young musician performed during two concerts.

Nikolai was born on 16 December 2002, of Korean-Russian parentage. He was living in Singapore from 2005 and started learning music at the age of five and half. He has mastered his skills from recorder to piccolo and then to flute within less than three and half years. In June 2015 he moved to Paris to pursue his studies. Nikolai is a laureate of numerous international flute and music competitions and won a scholarship of the International Music Academy of Liechtenstein. Currently he is studying with Prof. Pascale Feuvrier, CRR de Rueil-Malmaison, France.

On the 1st of April he will be awarded the ICMA Discovery Award at the Award Ceremony in San Sebastian, Basque Country, where he will also play during the ICMA Gala Concert with the Basque National Orchestra (Euskadi Orchestra) under the baton of Music Director Jun Märkl.