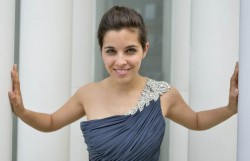 Opera and operettas, recitals, chamber music and family concert: French romantic music in all its forms! From June 3 until June 8, ICMA Award Winner Palazzetto Bru Zane organizes the fourth edition of its Parisian festival. This year the programming is extended, following a new partnership with the Théâtre des Champs-Élysées, where Spontini’s tragédie lyrique Olympie (1819) will be performed under the baton of Jérémie Rohrer.

The cycle of chamber music concerts and recitals will at the same time be continuing at the Théâtre des Bouffes du Nord, shedding a special light on Hahn, Lekeu, Koechlin and Benjamin Godard, in conjunction with the cycle which Palazzetto Bru Zane is dedicating to the composer throughout the spring of 2016. The Palazzetto Bru Zane’s new tour production – Il était une fois… (Once upon a time…) based around fairy tales as reinterpreted by the Romantic century – will also be given on this occasion.

As before, young talents and established musicians will be performing, among them ICMA Young Artist of the Year 2015, Jodie Devos.