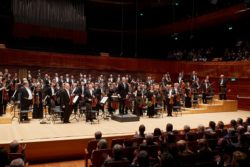 After the live broadcast by the Polish Radio and the deferred broadcast by MDR Kultur, three of the radio stations which are a member in the Jury of the International Classical Music Awards have announced their broadcasts of the ICMA Gala Concert with the National Polish Radio Symphony Orchestre in Katowice, on 6 April 2018.

HRT, the Croatian Radio, has scheduled the concert for Saturday 12 May.